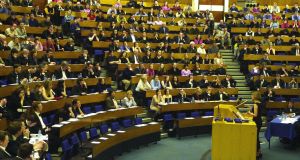 Introduction
The Irish Times Debate is Ireland’s national debating competition and it aims to have debates in as many different venues as possible. It is hoped that this guide will clarify exactly what is expected of hosts, and will ensure a uniform standard, which will ultimately result in a more enjoyable competition for all.

Therefore, before filling in the form and applying to host debates, please carefully read what is required of a host institution. Note also that in determining the venues for semi-final debates, an important consideration will be who has been a successful host of the initial rounds.

First and second round debates
The following must be provided for all debates:

Semi-final debates
All of the above applies, save where otherwise stated. In addition:

The grand final
The Irish Times Debate Final takes place in late February each year. All institutions who enter teams in the competition are invited to put forward a bid to host the final if they wish. The final is therefore held in a different location each year, depending on which institution is successful in their bid to host. If your institution is interested in hosting the final of The Irish Times debate please email debates@irishtimes.com