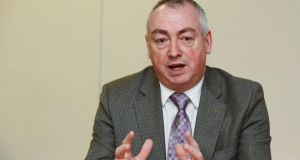 Tom Boland, chief executive of the Higher Education Authority: “No surprise given size and complexity of higher education system that allegations of misconduct arise from time to time.” Photograph: Alan Betson

The Higher Education Authority (HEA) has told universities and institutes of technology (IoTs) to set up procedures to protect whistleblowers as a matter of urgency.

The governing body for the sector said institutions should not wait for the enactment of whistleblower legislation to set up a means of “supporting confidential disclosure of information that is in the public interest”.

It follows a recent investigation into an alleged conflict of interest at two institutions which has run into the ground because there is no confidential recipient which the anonymous “whistleblower” can approach.

In a letter to presidents of the State’s seven universities and 14 IoTs, HEA chief executive Tom Boland said: “You will be aware that the Government plans to enact legislation providing for protected disclosures. However, formal enactment is still some time away.

“Accordingly, each higher education institution should consider as soon as practical what additional measures can be put in place to provide such protection. In particular you should consider the putting in place of a process where a person may give information on a confidential basis to a specified person who can act as an intermediary in the investigation of any such allegations.”

Allegations Mr Boland said it was “no surprise that, given the size and complexity of the higher education system and the number of people affected by it, allegations of misconduct/ misgovernance arise from time to time.

“The HEA accepts that overwhelmingly these have been dealt with appropriately by the institutions concerned.”

But, he said, better systems were required to protect anonymous complainants while also verifying their credibility.

The HEA, which is separately finalising new funding and governance contracts with the institutions, has told them to report back on an “appropriate course” of action they plan to take.

The initiative follows considerable frustration among education authorities as well as the colleges themselves in establishing the veracity of a number of recent complaints.