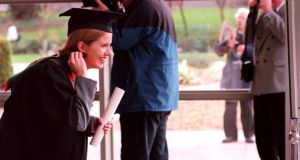 Higher education in Ireland is competing “very well internationally” and graduate employment has bounced back to pre-crisis levels, a major review of the sector published today shows.

The first ever Higher Education System Performance Report says institutions have responded “flexibly to demographic, staffing and financial pressures” while also adapting to meet Government objectives for the system as a whole.

The report, published this morning by Minister for Education and Skills Ruairí Quinn, is the culmination of a series of consultations between the Higher Education Authority (HEA) and the State’s universities, institutes of technology and other third level colleges.

Each institution has had to agree a “compact” with the authority outlining its plans for the future, and how it intends to differentiate itself from other higher education institutions domestically.

For the first time, institutions will be held accountable to agreed targets in areas such as access for disadvantaged groups, drop-out rates, the quality of teaching and learning, and research and internationalisation.

In a move that some claim may impact on academic independence, the HEA will have the power to apply financial penalties if institutions fall down on their goals.

The headline figures in the report show that Ireland is performing well against international benchmarks:

- Half of 30- to 34-year-olds now have third level qualifications, the highest level in Europe;

- Irish universities are in the top 1 per cent of research institutions in the world across 18 academic disciplines;

- Ireland is first in the world for the availability of skilled labour;

- Ireland has the 4th highest percentage of maths, science and computing graduates in the EU;

- 75 per cent of Irish employers are satisfied with graduate skills.

Mr Quinn said: “Higher education is one of the success stories in Ireland in recent years. Despite the strains and stresses it has endured, the system has shown great resilience and has been a major contributory factor to economic and social development.

“Of course there have been challenges and we are also aware that there will be further issues to grapple with in the years ahead.”

The report is silent on the question of how to fund higher education in the future, with a further HEA report on “sustainability” due to be published in the autumn.

The HEA says the increase could be even greater, however, as long-term projections from the ESRI and training agency Solas point to a recovering labour market, with most new jobs going to graduates.

The report advises that the combination of increased student numbers and reducing resources per student carries risks to the quality of graduates and outcomes generally. Such risks will need “careful management”, according to the report.

It points out that staff-student ratios are out of line with OECD norms: 1.19.5 compared with 1.15 to 1.16 internationally.

HEA chief executive Tom Boland said: “This report demonstrates that in the recent difficult years of economic turmoil, the higher education system has risen to the challenges of growing student numbers and reduced resources.

“The report does identify a number of stresses on the system and also highlights the need to plan strategically for a sustainable and high quality system to continue to meet the needs of students and Irish society.”

Among the other issues highlighted in the report are the relatively high completion rates for degree courses in Ireland, but this is countered by a deterioration in non-progression rates at Level 6 and 7.

The report also says the numbers and proportions of students from under-represented socio-economic groups are increasing, but not fast enough.

The Minister said he was concerned at both the completion rate for Levels 6 and 7 and the access targets, but added both issues were being addressed. Consultations would begin shortly to help prepare a new plan aimed at boosting the percentages of students from non-traditional backgrounds going to higher education, and this plan would be published before the end of the year.

Mr Quinn praised the manner in which staff in higher education had responded to the economic crisis.

Despite the pressures, he said, “I am happy to say that there is little evidence of any drop in the quality of our graduates to date. All our universities as well as DIT are still in the top 500 in the world and many of our institutes of technology performed exceptionally well in the recently published U-Multirank published by the EU.”