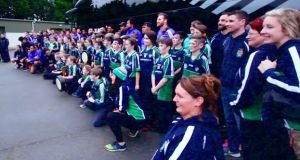 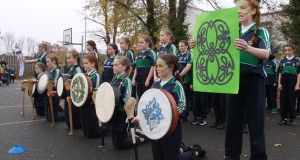 Children from a Co Dublin Gaelscoil performed a modified version of the Maori Haka for the All Blacks rugby team at their training ground ahead of this weekend’s much anticipated return Test at the Aviva Stadium.

Following on from Ireland’s historic win against the New Zealanders in Chicago in early November, some 60 children from 6th class, Gaelscoil Eiscir Riada, Lucan, performed a mixture of the fearsome Maori Haka - Ka Mate and a re-written version of Ireland’s Call for the assembled team at the Westmanstown Sports Complex on Monday.

Príomh Oide Damhnait Uí Ruairc said a parent came up with the idea for the performance in September and teachers and students spent the last two months preparing the Haka Gaelach for the event.

“A parent suggested the idea in September and asked if we might be interested in performing for the All Blacks. We said we would. The initial plan was that the boys would perform the Maori Haka but we decided we couldn’t do it without the girls.”

“After researching the Haka we discovered that the tradition is for the Haka to be performed by men. It was then that we decided to adapt it and incorporate Ireland’s Call into the performance”.

Gaelscoil Eiscir Riada performance for the All Blacks

Despite the excitement surrounding Ireland’s first ever win over the All Blacks, Bean Uí Ruairc said the famous result threw the event into some doubt, leading to fears it would not go ahead.

“We only heard on Monday morning that the event would go ahead - and even then, it was only 50:50. The students were taken on a bus to Westmanstown that afternoon and we still didn’t know if it would go ahead.”

The children’s fears were put to rest once the team arrived.

“The children were very excited. It was great for them. It is something they will never forget. Not only did they meet the All Blacks but they met the team that Ireland beat as well.”

All Blacks captain Kieran Read thanked the children for their performance.

“That was fantastic, what a welcome! It’s pretty awesome to see how much it means to you guys and to bring a bit of the Maori culture over here in Ireland, the boys certainly appreciate it.”

Founded in the local GAA club in 2005 with just 26 students and two teachers, Gaelscoil Eiscir Riada now has 470 registered students and 21 teachers and is under the patronage of an Foras Patrúnachta. It moved into a purpose built building in 2012.

Indicative of the demand for Irish language schooling, the school was oversubscribed this year.

“We are full at the moment. We could easily take another stream or two - and that is with another Gaelscoil around the corner,” Bean Uí Riada said.

The school is named after the Eiscir Riada, a geological ridge that stretches all the way west to Co Galway.

Eiscir Riada marked the division of Ireland into two halves - Leath Cuinn (Conn ‘s half) and Leath Moga (Mugh’s half) following the battle of Maigh Nuadad in AD123 between Conn Cétchathach (Conn of the Hundred Battles) and Eoghan Mór (also known as Mogha Nuadhad or servant of Nuada).