Further education funding to be linked with performance 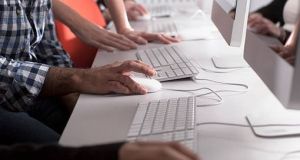 Funding for further education courses is to be linked with high performance under a new funding model to be rolled out shortly.

However, in a report over the summer the Department of Public Expenditure found there was a “fragmented” and “disjointed” approach to the way more than €800 million was being spent in the sector.

Solas, the State agency which oversees the further education and training sector, says it is tackling these issues through its new three-year corporate plan (2017-2020).

This sets out goals and targets under headings such as expanding apprenticeships, expanding skills, upgrading and boosting learners’ employability.

In addition, a new performance-based funding model is to direct extra funding to Education and Training Boards (ETBs) and programmes which demonstrate progress in meeting key objectives.

These are likely to include aims such as meeting the State’s skills needs, fostering innovation and delivering value for money.

However, chief executive Paul O’Toole said the organisation was not seeking to penalise individual further education providers by withholding funding for failing to meet targets. “We would prefer to see that, working with all of the actors in the system, we would collectively embrace the idea of continuous improvement.”

The State’s 16 Education and Training Boards, which deliver most further education courses, currently receive more than €500 million a year from Solas.

Mr O’Toole said an element of this funding would likely be performance-based, but no decision had yet been made on the overall proportion.

He said progress would not be measured using a one-size-fits-all approach given that individual ETBs have contrasting social and economic profiles.

“The world of further education and training is so diverse. What I am keen on is that our measure of performance is appropriate to individual ETBs.

“If you are doing a course in a specific skill or area, that is your measure. But if you are working with people with considerable disadvantage in their lives, such as Youthreach, success is they have stayed in a structured environment for the day and are sticking with it.

“As we move forward we’re going to be working out strategic performance agreements with individual ETBs. We see this as a collaboration.”

While Solas focused heavily on the need to engage unemployed people when it was set up in 2013, the growing economy means this is changing.

“We’re changing out focus in line with the needs of the economy,” Mr O’Toole said. “When we were established unemployment was 12.5 per cent. This month it was 6.1 per cent.”

New targets include a 10 per cent increase in people securing employment or progression to other learning opportunities after completing further education courses, while the numbers participating in lifelong learning are projected to rise by the same proportion.

In addition, Solas plans an increase of 10,000 people a year securing certification in required skills for identified potential business sectors.

This is Solas’s fourth year in operation having taken over from Fás which was wound down after its reputation was badly damaged by spending scandals.

Mr O’Toole, former chief executive of Tourism Ireland, has overseen some major restructuring of the training sector, having taken the helm of Fás after Roddy Molloy left.