Forum head calls on church to speed up schools handover 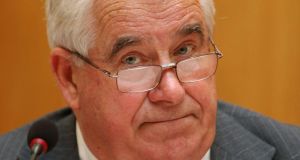 The Department of Education needs to wield a “stick” against the Catholic Church if it wants to make progress on the divestment of schools to other patrons, according to the chairman of the forum on patronage and pluralism.

Prof John Coolahan says the church’s refusal to take “a proactive stance” in promoting the divestment of schools undermined the process from the outset, and he suggests cuts in school funding might be considered to concentrate minds.

UN human rights monitors have criticised “the slow progress in increasing access to secular education” in Ireland and are warning the Government it faces fresh censure in the absence of reform.

Former minister for education Ruairí Quinn once talked about removing half of the State’s 3,100 primary schools from Catholic Church control to create a more diverse and inclusive system.

To date, however, the church has yet to hand over a single primary school to another patron, although it did merge two Catholic schools to create a vacant property for Educate Together.

One Church of Ireland school has transferred to Educate Together, the multidenominational patron which has also opened nine new primary schools in areas of growing populations.

Prof Coolahan said: “There needs to be a carrot and a stick and I think the stick wasn’t much applied as time went on.

“If there was no movement at all then I do think that you could say schools in this area – though this might be a bit crude – would have reduced capitation,” he added.

These are two of 28 areas that have been earmarked for change on foot of parental surveys in select locations.

Prof Coolahan, who oversaw the forum’s main report in April 2012 and has contributed to subsequent update reports, suggests it was a mistake to leave the Catholic bishops, as patrons, to drive the reforms.

While they arranged for boards of management to meet parents and to discuss the merits of changing patronage, he said, “they rarely turned up themselves.

“They didn’t explain, ‘look, we would like this to happen, we think this should happen because we have concern for the public good – love your neighbour’.

“They have never taken a proactive, direct stance, using their offices to open people’s minds. They have done it at a distance.

“It was never going to happen if you were just going to leave it open like that. It always needed church and State to use their good offices at local level where there was a legitimacy of moving.”

Rapporteur for Ireland Yuval Shany told The Irish Times: “We do not have the power to sanction states but we would contend the State is under a legal obligation to take on board the recommendations in good faith.