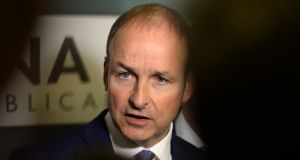 Fianna Fáil is planning to set up a new lending agency for students if elected to government, offering low-interest loans to help meet the cost of college education.

Under the plan, graduates would only repay the state-backed loans once they start earning more than €30,000, and unpaid debt would be written off after 30 years.

The party is the first to draw up detailed proposals on fund third-level education ahead of the general election.

The Coalition parties are awaiting the publication of an expert group report commissioned by former minister for education Ruairi Quinn before committing to any policy.

The Fianna Fáil plan, “Towards a fairer future: Universal Access Scheme for Third Level Education”, says the party will keep the student contribution charge – currently €3,000 – frozen at this level for at least five years.

It also pledges to overturn the 2012 abolition of postgraduate maintenance grants at a cost of €47 million a year.

In addition, Fianna Fáil says it will introduce legislation putting a four-week limit on unpaid internships to minimise the risk of exploitation of graduates.

The party’s spokesman on education, Charlie McConalogue TD said: “Central to our policy is the principle that access to a top quality education should be determined by merit and hard work, not ability to pay.”

Making cheap financing available to low and middle income students would assist in removing socio-economic barriers to education by making third level “free at point of access”, he said.

However, the party’s stance has already been challenged by its youth wing.

In a separate policy document, Ógra Fianna Fail advocates an income-contingent loan system alongside a “modest” rise of €2,000 in the current charge, bringing it to €5,000.

It says this would inject €300 million into the higher education system to help deal with overcrowding, falling standards and creaking infrastructure.

Ógra policy director Ian Woods, who is doing a PhD in biomedical engineering at UCD, said the 2011 pre-election pledge by Mr Quinn not to raise the charge “was not realistic then, and it’s not realistic now. Most students are accepting of this and would be willing to contribute to a better higher education system”.

Under the Fianna Fáil plan, loans would be administered by a new body managed within the National Treasury Management Agency, notionally called the “Student Finance Management Authority”.

Repayments would be deducted directly by Revenue.

On the issue of internships, Fianna Fail acknowledges their role in providing some education and training experience but says: “The current lack of regulation and fair access to internships further contributes to inequality.”