‘Education is not the filling of a pail, but the lighting of a fire’: It’s an inspiring quote, but did WB Yeats say it? 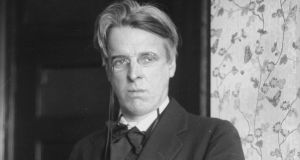 At a conference in the US I heard the keynote speaker quote William Butler Yeats: “Education is not the filling of a pail, but the lighting of a fire.” I liked the quote.

The speaker went on to say that college instruction should not be about dribbling drops of knowledge that students collect as they move from course to course. It should be more like gathering kindling, letting students play with matches, encouraging them to take risks and hoping that for some the materials burst into flames and become lifelong interests.

This won’t happen to every student in every class. It won’t necessarily happen when students or professor expect it to. But if it happens occasionally it makes a college education worthwhile.

Search for the source
Later, I googled the quote. All kinds of web pages popped up. It’s a very popular sentence. You can buy a poster with Yeats’s words in large type to decorate your classroom; you can find a photograph of a school lobby where the quote is embossed on the wall. One link was to a site titled something like “What to say if you have to give a commencement address”.

But two other links caught my eye. One led to an article in Psychology Today where the author said the quote was a misattribution. Another led to a blog post by someone asking: “Does anyone out there know the source for the quote from Yeats about education and starting fires?”

There were a number of responses. One was from a classics scholar who suggested the quote was a paraphrase of Plutarch, who wrote, according to some translations, “The mind is not a vessel to be filled, but a fire to be kindled.”

Another came from a self-proclaimed Yeats expert who said the quote had no source because Yeats never said or wrote it. That made me curious.

The Oxford Dictionary of Quotations showed lots of entries about education with plenty of citations to Yeats, but no pail, no fire. Bartlett’s Familiar Quotations, a widely used reference book in the US, produced the same result.

Google Book showed all the scanned volumes that contained the Yeats quote. When I clicked on specific entries, I couldn’t find a footnote with information about where the quote had come from.

Moreover, the earliest book to contain the Yeats quotation was published some 50 years after the poet had died. Despite his greatness, Yeats probably didn’t do much creative writing or speaking after he officially joined the dead poets’ society.

I asked a colleague in the English department of the Washington and Lee University if he had ever heard of the quote. The answer was, “No, and it doesn’t even sound like Yeats.” I looked up education in the The Collected Works of William Butler Yeats and the The Collected Letters of WB Yeats. No pail, no fire. I began to think the quote was indeed a fraud, albeit a mistake that has been repeated in books, speeches and websites.

Quote Investigator
So how could this happen? Maybe someone thought of something clever to say about education and then assumed that it would garner more attention if it had been said by someone famous. Yeats cared about education and he was dead so he wouldn’t mind.

A site called Quote Investigator speculated that a book that contained juxtaposed quotes from Yeats and Plutarch led someone to accidently attribute a version of the Plutarch line about vessels and fires to the Irish poet instead of the Greek writer.

It is, of course, very difficult to prove where a false quotation has come from. Moreover, proving that a prolific writer and frequent speaker never said or wrote a particular collection of words is challenging. Over time I became convinced that a widely repeated quotation, one that caught my fancy when I first heard it, was actually a major misattribution.

If and when I ever address students at a commencement, I plan to use the quote and follow it with an account of its problematic sourcing.

Then I can offer some advice that is becoming ever more important when so much information is instantly available and seemingly authoritative:
Don’t believe everything you hear from a speaker standing at a podium. Don’t believe everything you read in books.
Always be suspicious of information you find on the internet.
Do your own research about something that strikes your fancy.
Take some joy in finding things out for yourself even if what you find is complicated and incomplete.
Pursue the truth wherever it takes you.
And don’t be afraid to challenge prominent people and published sources if you find evidence they might be wrong.

“Education is not the filling of a pail, but the lighting of a fire.” A famous poet may not have said it. I may not know who did. But it is true.

At all levels of education, what we as teachers hope for is that our students will find issues, ideas, authors, experiments, projects and problems that they find genuinely exciting. We want them to get fired up about something. We want education to be about those fires.

Robert Strong is a professor of politics at Washington and Lee University in Lexington, Virginia, and a visiting Fulbright scholar in history and archives at University College Dublin