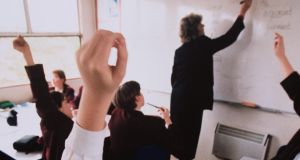 Principals of 10 Educate Together schools have called for the admissions policy of a planned new school to be changed. Photograph: Stephen Shepherd/The Image Bank/Getty Images

The principals of 10 Educate Together national schools in south Dublin have written to Minister for Education Jan O’Sullivan calling for the admissions policy for a planned new Educate Together secondary school to be changed.

They say the new secondary school, to be opened at a site yet to be finalised in the Stepaside area, should prioritise children coming through the Educate Together national school system in its enrolment policy.

According to the department, all schools opened since 2011 must give priority to children in their catchment area.

The Educate Together national school principals say this criteria has “no basis in Irish law” and contravenes the “statutory and civil rights” of parents.

In the letter to the Minister, dated April 28th, 2015, the principals welcome the establishment of an Educate Together second-level school in the south Dublin area.

However, they add: “We seek an admission policy that gives priority to those students for whom the school was established, namely those who have chosen the Educate Together ethos.”

“This right is enshrined in the Education Act 1998, which requires the State to ‘promote the right of parents to send their children to a school of the parents’ choice having regard to the rights of patrons’.”

They say the Act emphasises that “the patron of a school shall carry out the functions and exercise the powers conferred on the patron by this Act”.

“This proposal, coupled with the absence of any ET secondary school in south Dublin, works to exclude our network of primary schools and large and growing cohort of parents who are denied access to their choice of second-level school for their children.

“It is crucial therefore that the concept of a geographic catchment area in the admissions criteria for ET secondary schools which, as yet, has no basis in Irish law, be replaced.”

The letter calls for ET secondary schools’ enrolment policies to prioritise students who have completed “at least three years of the primary education at an ET national school”, siblings of existing students at the ET second-level school, and then students from other schools on a first come, first served basis.

The letter was acknowledged with an email from the Minister’s private secretary Seán Tansey on April 28th.

“Inquiries are being made about this matter and a further letter will issue as soon as possible,” he wrote.

No other correspondence has yet been issued.