Taking religion out of classroom could result in nihilism and self harm, says school manager 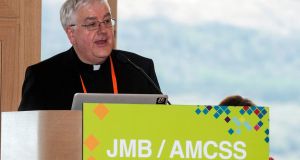 Fr Paul Connell, president of the Joint Managerial Body and the Association of Management of Catholic Secondary Schools: he said Catholic schools have been playing a vital role in helping young people grow in faith. Photograph: Sally MacMonagle

Dismantling the Catholic ethos of schools would leave children in a moral vacuum and in danger of despair, the president of a school managers’ body has warned.

Fr Paul Connell, president of the Joint Managerial Body and the Association of Management of Catholic Secondary Schools, said Catholic schools have been playing a vital role in helping young people grow in faith.

“ The alternative is a vacuum that can express itself in nihilism and the growing phenomenon in our schools of self harm,” he said.

He said Catholic schools were open and welcoming to the children of other faiths and none. But Fr Connell said they were being unfairly criticised by prominent media figures.

“For example, it is disheartening and indeed insulting to read articles in a national newspaper by a prominent academic associating baptism with being a ‘stain on the national consciousness’ or encouraging dismantling protection of our Catholic ethos with the phrase, ‘the snakes are coming back, you know’,” he said.

“For us to use similar language in our discourse would be rightly seen as inappropriate and unacceptable.”

He said the presence of children from other traditions enriched the educational experience offered in its schools.

Fr Connell said a commitment to this ecumenical spirit was not characterised by a reduction of all Christian expressions to the lowest common denominator. “While respect of course should always be afforded to the religious freedom and personal conscience of individual pupils, the Catholic school cannot relinquish its own freedom to offer a formation based on the values to be found in a Christian education,” he said.

The president of the school managers’ body also expressed frustration at the lack of information on CAO points available to Leaving Cert students after they receive their results.

“Why cannot our students have the up-to-date points list to hand on the day they receive their Leaving Certificate results? The present arrangements are very unfair to students and lead to unnecessary further stress on top of the results themselves.”

Fr Connell also said the delivery and timing of the oral examinations needed to be reviewed urgently. “The amount of tuition time lost by non-examination students due to the absence of their teachers is no longer sustainable,” he said.

School managers also faced a “crisis” in the supply of teachers of Irish and Continental languages, despite the fact that schools received hundreds of CVs for vacancies in many other subjects.