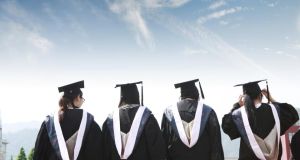 At Trinity College Dublin, only eight out of 301 students who sat psychology between 2004 and 2013 failed to achieve a 2.1 or a first.

Students attending Dublin City University (DCU) or University College Cork (UCC) have a much higher chance of graduating with a first class honours degree than other college-goers, new figures show in a fresh indicator of “grade inflation”.

Over the past 10 years, 17.7 per cent of graduates at DCU and UCC each received a 1st, compared to 12.8 per cent at Maynooth University and just 11.9 per cent at University College Dublin (UCD).

This is despite the fact that entry requirements for courses at DCU and UCC are generally either the same or lower, indicating no marked difference in the quality of student.

The figures, obtained by The Irish Times under the Freedom of Information Act, also show that a general increase in the percentage of students getting a 2.1, the next highest grade to a first. 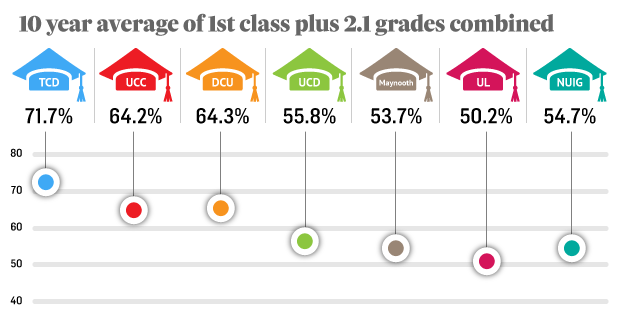 At Trinity College Dublin, only eight out of 301 students who sat psychology between 2004 and 2013 failed to achieve a 2.1 or a first.

The university said this was due to the fact that it attracted “exceptionally bright cohorts of students”. Many companies, especially in finance and law, demand a first or 2.1 for entry-level jobs or internships.

The founder of The Summit web company, Paddy Cosgrave, sparked controversy earlier this year when he said it would only accept interns who had got a first, with the exception of Trinity graduates where a 2.1 would be allowed. Mr Cosgrave, a TCD alumnus, argued that “a 2.1 in one university would not equate to a 2.1 in another university”.

While the overall figures raised questions for particular universities, there were more general signs of grade inflation at faculty level.