Merger expenses to top €45m, according to data submitted to Department of Education 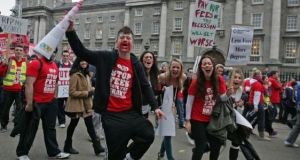 Students march against reduction in grants. The TUI said the Minister had been advised that mergers were a costly process and that institutes of technology would have to bear the bulk of fees. Photograph:

Students will end up footing the bill for the bulk of the cost of creating new technological universities, unions have claimed.

The Government is planning to pass a Technological University Bill ahead of the general election which will pave the way for the potential merger of up to 10 institutes of technology.

To date, colleges and the State have shared €5 million on merger costs, with most of this money going on professional fees and pay.

Total merger costs are likely to cost at least €45 million, according to figures submitted to the Department of Education.

Official in the Teachers’ Union of Ireland (TUI) have claimed that these additional costs will fall mainly on students, who will face higher fees and charges for “many years into their working lives”.

Susan Flannery, a TUI representative, said Minister for Education Jan O’Sullivan had been advised by her own experts that mergers were a costly process and that institutes of technology would have to bear the bulk of the fees.

She noted comments made by chief executive of the Higher Education Authority (HEA) at a recent Dáil committee, in which he said he expected institutions would raise funds through revenue-generating measures or other costs.

In a statement, a spokeswoman for the Minister said it was recognised that mergers would carry up-front costs and the HEA has provided a fund to help colleges meet these.

It has contributed €2 million out of the €5 million spent on merger costs to date. A further €2.5 million is being made available this year for the groups seeking to secure university status.

In all, 10 of the State’s 14 institutes of technology form part of four separate groups in Dublin, Munster, Connacht-Ulster and the southeast which are bidding for the new designation.

All these alliances will have their bids examined by an international panel as part of a four-step process.

The move to create a new category of university follows a national strategy for higher education published four years ago.

The blueprint envisages creating larger centres of excellence through the merger of smaller institutions, though some critics claim the strategy is the result of political lobbying to secure universities for different regions.

The TUI, which supports the overall concept of technological universities, has called on the Government to postpone plans to enact legislation.

The union’s president Gerry Quinn has said it has withdrawn from merger talks ahead of a ballot of members which seek a mandate for industrial action up to and including strike action over the issue.

“The Technological Universities Bill, which is currently being rushed through the enactment process with reckless haste and without sufficient deliberation, contains significant threats to the institute of technology sector and to the working conditions of the academic staff in the sector,” he said.

“The TUI is gravely concerned by the decision to rush it through without reasonable effort to address the deep concerns of our members.”

A spokeswoman for the Minister said the development of Technological Universities had the potential to deliver greater opportunity to students in these regions, to staff working in the institutions, and to the broader local economy and society.

“This is much more than a rebranding exercise – the institutions are required to merge and to achieve high standards across a range of areas before being designated as Technological Universities,” she said.

“These high standards include the qualifications of staff, the research output of the merged institution, the proportion of students engaged in lifelong learning, amongst other issues.”