Plus: who’d be general secretary of the ASTI? 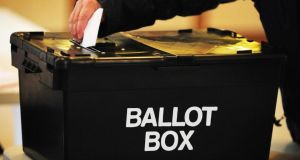 Secondary teachers receiving their Junior Cycle ballot papers this week are facing not one but two questions to vote on.

The first is whether to accept the compromise plan negotiated between union leaders and department officials last May. The second is whether to support industrial action, up to strike action, if members reject the plan.

While it might seem strange to ballot on contingency measures, the second vote is aimed at closing off a doubt surrounding the legality of the ASTI/TUI industrial action. There were fears within the TUI in particular that the unions could fall foul of industrial relations law because their strike mandate referred to the now filleted Ruairí Quinn reform plan.

The TUI took legal advice following the second one-day strike last January and has reached the conclusion, along with the ASTI, that should the Junior Cycle plan be rejected, it is snookered without a new mandate.

Aside from the outcome of the vote, the turnout will be closely watched. Only 45 per cent of ASTI members bothered to vote in the original Junior Cycle ballot. But turnout should be helped on this occasion by the running of a parallel ballot on posts of responsibility.

They say secretary general of the Department of Justice is the most undesirable job in public life right now (post-Fennelly report) but who would want the equivalent position in the ASTI? Sure, it comes with a salary of about €130,000, but you won’t get much affection from your members, as outgoing general secretary Pat King will testify.

Job interviews are taking place this month, for which candidates had to submit “in no more than 300 words your vision for the ASTI” and how to implement it.

The most unusual aspect of the recruitment process, however, is the adoption of a 10-person interview board entirely composed of internal officers and rank-and-file teachers – and not a single external expert.

It seems the union wants less of a tactician and more of a militant – the reverse of King, who delivered an unpopular message to the ASTI central executive committee last month when he spelt out the implications of voting No to the Lansdowne Road deal.