Catholic ethos in only one of nine new schools 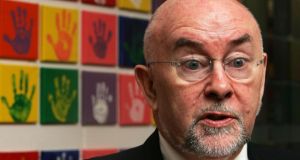 Ruairí Quinn said: ‘I am confident that these new schools, alongside the existing schools in each area, will mean that parents and students have real choice when it comes to deciding which school most reflects their own ethos.’ Photograph: Cyril Byrne/The Irish Times

Only one of nine new post-primary schools announced by the Department of Education and Skills this morning will have a patronage applying a Roman Catholic ethos. All others will be overseen by multidenominational patrons.

The nine new schools will be opened in 2015 and 2016, and will provide spaces for 7,300 students in areas of Cork, Cavan, Dublin and north Wicklow, the department said.

Five will be large schools catering for more than 1,000 students.

‘Diversity of ethos’
Parental demand played a central role in the decision-making on the patronage of each school, with perspective patronages asked to provide evidence of parental wishes, the department said.

“The fact that the new patrons include those of multidenominational and those of a Catholic ethos clearly demonstrates that the department and I are committed to providing diversity of ethos in our schools and respecting the demands of parents,” Minister for Education and Skills Ruairí Quinn said in a statement.

The Edmund Rice Schools Trust school in Cork south suburbs/Carrigaline is the only one to have a patronage that is exclusively Catholic.

The Minister introduced an advisory body in 2011, the New Schools Establishment Group, to advise him on what patronage to apply to new schools. The schools themselves arise because of a Government commitment in that year to build 20 new post-primary schools by 2017 in response to increasing student numbers.

“I am confident that these new schools, alongside the existing schools in each area, will mean that parents and students have real choice when it comes to deciding which school most reflects their own ethos,” Mr Quinn said.

The process, through the New Schools Establishment Group, ensured an “objective and transparent process”, he added.

Bishop of Cloyne
The joint Educate Together and ETB school is in Celbridge, Co Kildare (subject to confirmation of sufficient parental support) and a new school in Midleton/Carrigtohill, Co Cork, will be managed by the local ETB, with the involvement of the Catholic Bishop of Cloyne.