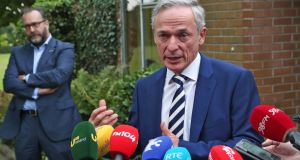 Minister for Education Richard Bruton: “I would be concerned. I know the chief examiner has looked at this and there do seem to be difficulties in areas such as trigonometry and algebra.” Photograph: Colin Keegan/Collins

Almost 3,000 students failed to secure a minimum of a grade D in the ordinary level maths paper, an increase in the failure rate from 5.8 per cent in 2015 to 9.2 per cent this year.

Mr Bruton said that while he was encouraged to see so many students doing well in the higher level paper, there were questions to be asked at ordinary level.

“I would be concerned. I know the chief examiner has looked at this and there do seem to be difficulties in areas such as trigonometry and algebra.

“I think we need to make sure there is a proper understanding among pupils, teachers and the assessment system of the standards we are trying to achieve at this level.

“There are lessons to be drawn from that and we will take a hard look at that.”

Mr Bruton said the National Council for Curriculum and Assessment is set to examine the maths curriculum to see if changes or modification are required.

Latest figures also show the numbers taking the more practical Leaving Cert Applied are continuing to drop, down 15 per cent over the past five years.

This is despite an overall increase in the numbers taking the regular Leaving Cert.

Mr Bruton said that while he was concerned at the drop, there were many hands-on alternatives to college available for school-leavers.

“The number of apprenticeships has doubled in recent years, and is set to more than double over the coming years . . . there will be more outlets for people who want to do more applied courses, and PLC (post-Leaving Cert) courses offer a range of practical options,” he said.

The Leaving Cert has been widely criticised by educators for placing too much emphasis on rote-learning rather than the kind of critical-thinking sought in the modern workplace.

Mr Bruton said that while the exam’s great strength was its fairness and objectivity, he accepted there was not enough emphasis on valuing a wider range of skills.

He signalled, however, that any changes would have to wait until junior cycle reforms are fully bedded in.

“We are moving to introduce a junior cycle which will value a much wider range [of skills],” he said.

“The logical direction is that as we embed it, we will move to reforms at senior level.”

There have been calls, meanwhile, for Leaving Certificate results and CAO college place offers to be released on the same day to reduce stress and to give greater certainty to students.

Clive Byrne, director of the National Association of Principals and Deputy Principals, said students were expected to endure the anxiety of waiting for their exam results initially, followed by several more days of nail-biting to see if they got their desired college place.

“With huge advances in our technological capabilities, at a minimum, it is worth exploring with all stakeholders the viability of introducing such a system,” he said.

Disappointed students who do not get the points they need to study their desired courses are being advised to examine a wide range of alternative routes.

“I would urge students to consider all routes into an engineering sector full of job opportunities,” he said.