No vote could see 550 school closures 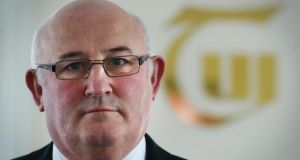 The union had ’repeatedly sought concrete practical details’ of the proposed Junior Cert reform but the department had not provided this, TUI president Gerard Craughwell said yesterday. Photograph: The Irish Times

The threat of school closures in January hangs over a ballot of the Association of Secondary Teachers, Ireland (ASTI), the results of which should be known tomorrow. If teachers reject a revised agreement hammered out with the Department of Education and Skills, then up to 550 schools could close on January 17th on health and safety grounds.

Separately, the Teachers’ Union of Ireland (TUI) has also threatened a ballot of members that would block Government plans for revision of the Junior Cycle.

The ASTI ballot relates to the Haddington Road Agreement which set terms and conditions for all public service unions. ASTI was the only union to vote no to Haddington Road, a move which prompted further negotiations and a second ballot of its members.

This second ballot closes at 5.30pm this evening and independent auditors will oversee the count today, with a result due about lunchtime. The union said yesterday it had no impression of how the vote would go or if turnout might exceed the 55 per cent poll returned in the first Haddington Road ballot.

The department has already warned that a No vote would cause it to invoke powers under the Financial Emergency Measures in the Public Interest Act. This would allow it require ASTI members to provide supervision and substitution duties without payment of an allowance for these services from January 17th.

“Any attempt to change teachers’ conditions in that way would be met by appropriate action decided by our standing committee,” an ASTI spokeswoman said yesterday.

The department is also under pressure after the TUI threatened to ballot members. The union had “repeatedly sought concrete practical details” of the proposed Junior Cert reform but the department had not provided this, TUI president Gerard Craughwell said yesterday.