Dodge the pitfalls and get on track for the right career 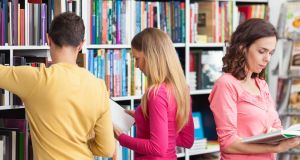 College is about new experiences and new friends, so don’t stick tightly to who or what you know

1 Picking a profession rather than a passion “Ah, the heart or the money?” says David Coyle of Methodius, which specialises in IT recruitment. “Heart, all the way, and I’m not being soppy. Study what you love. If you don’t, you’ll not only be unhappy in the wrong career, you’ll be bad at whatever you do and therefore have a poor career. There is no doubt in my mind that you cannot fit a round peg into a square hole and be comfortable.”

2 Going for a course because it’s got high points and you think you’ll get it A not-so-bright trap for particularly bright students. This happens, for instance, when a straight-A student has spent the last decade shining at school and is generally expected, by virtue of their academic prowess, to plump for a high-points course such as actuarial studies, law, science or medicine. Maybe that student really wants to study arts but has absorbed a narrative about “wasting” their points. This is a mistake. It’s your course, it’s your life: go with what you love.

3 Listening to bad advice Some parents or career guidance teachers think they know what’s best for you. But sometimes you know best. If you’re under pressure to choose a law course, but your instinct is telling you that it’s the wrong choice, trust your instinct. If you really want to do engineering instead, then do so. If you’re told to go for a course because you’ll get a job, but it’s a programme you don’t want, then don’t do it, says Coyle. “There’s an emphasis on ICT, but for those who are not so software savvy, don’t sweat it: the ability to write and to construct a sentence is still a major asset.”

4 Rushing the decision February 1st, February 1st, February 1st. Students are under pressure because they must submit a CAO form by this date. But for most courses (except, notably, most creative arts and other porfolio-based programmes, as well as medical courses) you can change your mind using the CAO Change of Mind form, before July 1st. And so you leave it till June, when you’re swamped by Leaving Cert exams, and rush your final decisions. Or you leave it until after your exams in mid-June, when you’re exhausted and drained, and rush your final decisions. The timing of this system isn’t ideal, but you’re stuck with it.

5 Forgetting about extra-curricular It’s not all about course choice. Getting involved in student life, whether clubs, societies, the student paper, the students’ union or a voluntary organisation used to be about enriching your college life, developing more as a person and realising that you can choose your friends based on common interests and mutual respect.

Now, employers with several dozen identical CVs from graduates with 2:1 degrees will differentiate between those applicants by what else they have done and how they have shown themselves to be a fully developed person with communication, teamwork, organisational and other skills. It’s less of an issue in the big universities where there are plenty of extracurricular options, but do make sure whatever college you choose has extracurricular options that interest you.

6 Fear Choosing the same course as your best mate/ boyfriend/ girlfriend. College is about new experiences and new friends, so don’t stick tightly to who or what you know. Besides, chances are you won’t be with that boy or girl past first year of college.

7 Making narrow course choices – and assuming that your course is your career “The multiplicity of courses out there at undergrad level adds to the complexity of the decision process,” says Betty McLaughlin, president of the Institute of Guidance Counsellors. “It’s too much to try to decide the difference between, say, electronic, computer, mechanical and biomedical engineering. More generic entry routes [such as a general arts or science or agricultural science or commerce degree] are welcome.”

You don’t know where your degree will take you, says Coyle. “People assume your course is your career, but it’s not. IT is changing the workplace, and there are so many jobs that haven’t even been invented yet. So do what you love and then, if you need, you can do a more practical postgrad or training course after your degree.”