Deenihan endorses plan for fresh investigation into sinking of Lusitania 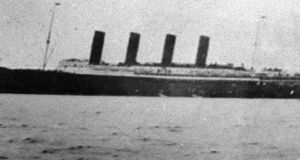 Minister for Arts, Heritage and the Gaeltacht Jimmy Deenihan has endorsed plans for a fresh investigation into the sinking of the RMS Lusitania.

The passenger liner was torpedoed by a German U-boat 13 miles off the Old Head of Kinsale in 1915 and sank in 18 minutes with the loss of 1,198 lives.

The ship’s sinking was a catalyst to bringing the US into the first World War, despite Germany’s claim it was a legitimate military target.

Mr Deenihan said he had agreed a broad set of exploration objectives with US businessman Gregg Bemis, who owns the rights to the wreck.

Mr Bemis believes the answer to whether the ship was carrying a secret military cargo may lie inside the wreck. He is planning to conduct a series of diving expeditions to the wreck.

“A general agreement on the objectives of further research planned by Mr Bemis was endorsed by both parties,” a statement from Mr Deenihan’s department said.

Up until last year, Mr Bemis had been in a long-running legal battle with the State over his exploration plans which the State had deemed potentially injurious to its heritage rights to wrecks in its waters.

“Both the Minister and Mr Bemis agreed that there is also a need for a greater understanding of the present condition of the wreck and to assess its rate of deterioration over time so that future research can target areas that may be at risk of becoming totally inaccessible or which might reveal information on the key questions surrounding the last moments of the vessel before it sank,” the department’s statement said.

The Minister is currently reviewing a new licence application from Mr Bemis for a sustained project on the wreck site over the next three years.

Under a previous licence granted in 2007, which expired at the end of 2011, Mr Bemis carried out explorations on the wreck with a view to gaining information on the possible cause of a second explosion at the time of its sinking that might have accounted for it going down so quickly.

He was also licensed to recover specific artefacts that might add to his and the State’s understanding of the wreck, as well as the life and times of those on board the vessel when it was lost.

In his current licence application, as well as continuing his forensic investigations into the cause of the second explosion, Mr Bemis is also proposing to recover more artefacts with a view to an exhibition being mounted in a suitable museum in time for the centenary of the sinking.

At the meeting, Mr Deenihan discussed Mr Bemis’s offer to present a number of artefacts from the wreck to the State ahead of the forthcoming 100th anniversary of the sinking of the ship.

US election: Trump holds rallies as Covid-19 cases and deaths surge 08:50
Mother and Baby home survivor: ‘My identity, heritage and culture was taken from me’ 08:00
Justin Thomas finishes with a kick to lead by one in California 07:46
Couple found guilty of murdering Irish dancer with ‘devil’s breath’ drug 07:41
Ulster aiming to douse Dragons’ fire and extend unbeaten start 06:00