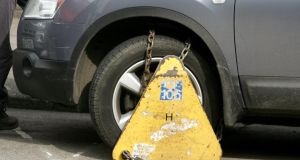 Clamping: People have been charged up to €300 to get their cars back by some rogue clampers. Photograph: David Sleator/The Irish Times

Work on the regulation of off-street clampers, including “rogue clampers” who charge up to €300 to release vehicles, “is in the early stages” according to the National Transport Authority (NTA).

The authority, which was given the power to set maximum release fees and impose a code of conduct on off-street clampers under legislation passed earlier this year, said it now needs time to prepare and establish the necessary regulations.

Regulation of the industry was first promised by Fine Gael in 2010 and contained in the Programme for Government in 2011. In 2013 then minister for transport Leo Varadkar posed with a clamp outside Government buildings to announce regulation of what he described as “rogue clampers”.

The move followed a number of complaints against clampers including an incident in Rathfarnham in south County Dublin, where Mass goers found their cars clamped on open ground, as they emerged from church. Similar complaints were made about clamping in hospitals, outside schools and in shopping centres.

There was therefore “quite an amount of preparatory work to be done by the NTA before the provisions of the Act can become operational”.

A spokeswoman said the timing would be “later this year” at best.

At the time Mr Varadkar said “we all know of instances where people were charged €200 or €300 and warning signs weren’t good or were very far away.

“There have been a number of cases where private clampers are reported to have behaved unfairly or inappropriately.

“So we are now regulating the entire clamping industry for the first time.”

The authority’s statement concluded: “the Act also provides for complaints and appeals procedures and the NTA will also need to prepare regulations around these, and indeed for other matters provided for in the Act.”