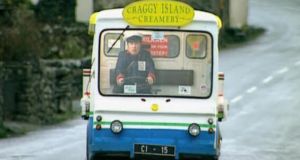 A widow who claimed she was knocked down by Father Dougal and injured by a milk float used in the cult television comedy show Father Ted has settled a High Court action for damages.

A widow who claimed she was knocked down by Father Dougal and injured by a milk float used in the cult television comedy show Father Ted has settled a High Court action for damages.

Geraldine Naughton (59) of Inisgrove, Lahinch Road, Ennis, Co Clare, claimed she was pinned under the float after it drove up against the kerb of a roundabout and rolled over her left leg.

According to court documents, the milk float was “driven or steered erratically” by a man dressed as the buffoon priest Fr Dougal McGuire during the Father Ted festival in Kilfenora, Co Clare on or about February 26th, 2008.

Ms Naughton claimed she fell after she was driven up against the kerb of a makeshift roundabout by the milk float, whereupon the wheel of the float passed over her leg leaving her in “great pain”.

When the float was removed her ankle and lower leg were swollen and extremely painful.

She was taken to Ennis General Hospital where x-rays revealed a fracture to the tip of her left fibula and she was placed in plaster. She had to use crutches for eight weeks. She also sustained a laceration to the back of her left ankle.

She was seen at the fracture clinic at Limerick Regional Hospital on various follow up dates where it was also noted she had sustained a friction burn of the skin on her left calf. The cast was removed in April 2008 and she underwent physiotherapy.

According to the plaintiff’s claim papers lodged with the High Court, Ms Naughton was “left with a scar that constitutes a cosmetic defect”.

“This is a source of great embarrassment to the plaintiff as she is very conscious of the scar,” the document stated.

It was also claimed the plaintiff continues to suffer from pain if she partakes in any physical exercise and is unable to wear high heeled shoes.

Ms Naughton sued for damages for personal injury, loss, inconvenience and expense caused or occasioned by the negligence on the part of the defendants or one of them, their servants or agents. She also claimed interest on all special damages pursuant to Statute and further or other reliefs, as well as court costs together with VAT at the appropriate statutory rate.

According to the claim document, the plaintiff and seven others took part in a fundraising event organised by and for Down Syndrome Ireland Ltd, the first named defendant, which involved pushing a milk float from Ennistymon to Kilfenora in Co Clare, a distance of approximately 10kms.

“The said milk float was the same or a replica of the milk float which had featured in an episode of the television comedy programme Father Ted , which particular episode was a parody of the action movie Speed , and accordingly the milk float would be recognised with fondness by aficionados and followers of the Father Ted programme,” the claim document stated.

There was no admission of liability by any of the parties involved.

The terms of the settlement was not disclosed and the mater was struck out by Mr Justice Iarfhlaith O’Neill at the High Court sitting in Limerick.