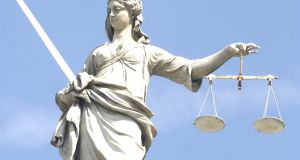 Court heard that the false allegation had cost the PSNI over £2,000 in the course of its investigation.

A Derry mother of six has been jailed for nine months after admitting making a false allegation of rape, at Dungannon Crown Court.

The defendant, who had previously been living at a hostel in Co Antrim after being “intimidated out of Derry by paramilitaries”, made a 999 call on January 18th last year to police that a male had sexually assaulted her in west Tyrone.

Prosecution counsel Jonathan Lowry said the defendant had left Derry and travelled to a town in west Tyrone, where she went drinking with the injured party, who was in his 20s, at his residence on January 17th.

She had taken eight cans of Carlsberg with her and had been sleeping on the sofa in the injured party’s home.

When she awoke the male was on top of her and was having sex with her. Her clothes had been removed and he had used no protection.

She kicked him off and he then committed a sexual act in front of her, the court heard.

Police arrested the injured party on January 18th on suspicion of rape.

He denied the allegation and his account was backed by the two other women who had been at the location.

The defendant, who has 77 previous convictions, withdrew her complaint on January 21st and said she had been drinking.

She denied telling lies, but said she had made a mistake.

The court heard the defendant and the injured party, who spent 13 hours in police custody, had an “affectionate” relationship, despite the false allegation of rape.

Mr Lowry said the false allegation had cost the PSNI over £2,000 in the course of its investigation.

Defence solicitor Paddy McGurk said his client had withdrawn the allegation fairly quickly. He said his client may have had a hallucination due to a cocktail of alcohol and drugs, but accepted the injured party was not guilty of any criminality towards her.

“The complainant does not bear any ill-will towards her and that is to his credit.”

He said the defendant had spent her formative years in institutions and that was the background to her many appearances before the court.

She had a good relationship with four of her six children and was very concerned that one of them was going off the rails.

His client had been in custody since July, the court heard.

In jailing the defendant for nine months, Judge Melody McReynolds said Hynds was due to be sentenced last June but had “absconded” and was placed in custody.

She added an aggravating factor was that the complaint of the alleged rape had lasted for three days. The judge said prison had helped Hynds, as her appearance was “the most healthy I have seen”.