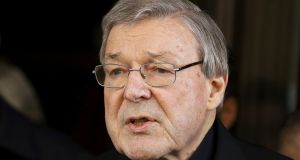 Cardinal George Pell, the Australian-born Vatican treasurer, is being investigated by police in relation to multiple allegations of child abuse in his home country, the Australian Broadcasting Corp (ABC) reported on Wednesday.

In a statement issued in Rome on Wednesday, Cardinal Pell’s office said he “refutes all the allegations made on the program”.

Victoria state police have been investigating allegations against Pell, which date from the 1970s to the 1990s, for more than a year, the broadcaster said, adding that police had referred the matter to the public prosecutor’s office for advice.

Victoria Police declined to comment to Reuters which was unable to independently confirm the accusations in the ABC report.

The ABC quoted a spokesman for Victoria Police commissioner Graham Ashton as saying there was “very much a live investigation” into the allegations.

ABC said it has obtained eight police statements from complainants, witnesses and family members who were helping with the investigation.

The statement from Pell’s office said: “The ABC has no licence to destroy the reputation of innocent people and Cardinal Pell, like all those who have allegations against them that have not been tested by the Courts, is entitled to the presumption of innocence - not immediate condemnation. He is entitled to a fair go.”

“While the Cardinal in no way wishes to cause any harm to those making allegations of sexual misconduct and abuse against him, the simple fact is that they are wrong,” it said.

The statement Pell’s office release also said he had “co-operated in the past and will continue to co-operate through the proper and appropriate civil authorities.”

This year, Cardinal Pell testified at an Australian government inquiry into institutional child abuse, where he said the Church made “catastrophic” choices by refusing to believe abused children, shuffling abusive priests from parish to parish and over-relying on counselling of priests to solve the problem.