Troops are given Lariam without proper checks, group says 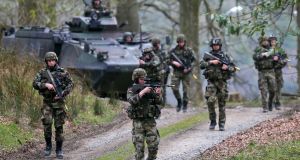 The Defence Forces has not been screening military personnel properly before prescribing the controversial anti-malaria drug Lariam, a support group for soldiers has said. File photograph: Colin Keegan/Collins Dublin

The Defence Forces has not been screening military personnel properly before prescribing the controversial anti-malaria drug Lariam, despite the Government’s claims to the contrary, a support group for soldiers has said.

The Action Lariam group said new cases of serving and former personnel suffering ill effects after taking the drug, up to and including suicidal ideation, were continuing to emerge.

It believes the withdrawal of the drug from public sale in Ireland coupled with recent developments in the British military represent an acknowledgement that the drug is not suitable.

It wants the Defence Forces to stop using the drug, to acknowledge the suffering of the affected personnel and to treat them .

It also wants the Defence Forces to accept that 17 personnel discharged from the forces on health grounds were among the sufferers and should never have been discharged.

However, the Department of Defence told The Irish Times that some 7,000 personnel have been prescribed the drug for overseas tours of duty, many of them multiple times.

No plans to change

“The choice of medication for overseas deployment for both officers and enlisted personnel, including the use of Lariam, is a medical decision made by the medical officers in the Defence Forces,” the department said in a statement.

It said medical officers conducting individual screening of personnel considered the circumstances of the mission and the individual being deployed overseas.

Up to the end of August, 50 cases had been lodged by personnel alleging personal injury as a consequence of taking Lariam.

However, while the first case had been lodged in 2007, none of the cases has yet reached the courts.

The department also said none had been settled out of court.

Former army private Tony Moore, of Action Lariam, said he had suffered from anxiety and depression as far back as the mid-1980s.

Yet he had been prescribed Lariam when going overseas to serve in Liberia in 2005 and in Chad three years later.

He believed that, had the medical consultation before he departed been thorough and geared towards checking the suitability of military personnel for the drug, he would never have been prescribed it.

In his medical check-up before being prescribed Lariam, he said, the emphasis was on checking his physical wellbeing, rather than his mental state, to determine suitability.

In Britain, it has emerged that personnel will now only be prescribed Lariam if approved for the drug after a face-to-face consultation with a medical professional, rather than screening based on medical files, the process used to date.

The former head of the British army Lord Dannatt recently apologised to personnel who had served under him from 2006 to 2009 and who had been prescribed the drug.

He said he had refused to take it after seeing the impact it had on his son, who took it for a visit to Africa in the 1990s.

“He became extremely depressed; not the person that he would normally be – a very bubbly, personable sort of individual,” Lord Dannatt said.

“He got very withdrawn, and we got very worried about him. If that had been untreated, who knows where it would have gone.”