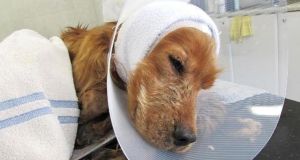 A raid on a Co Carlow farm in April saw 362 animals rescued. There was a large range of breeds seized including huskies, cocker spaniels, Yorkshire Terriers and Shih Tzus.

Three people have been arrested after a raid of Co Carlow puppy farm in April which saw 362 animals rescued.

Gardaí said a man and two women, all aged in their 40s, were arrested this morning as part of an animal cruelty and neglect investigation which arose from the discovery of 351 dogs and 11 horses at the farm in Myshall.

The nine-day rescue operation involving gardaí, the Irish Society for the Protection of Animals (ISPCA) and Carlow County Council was of an “unprecedented scale”, representatives from the ISPCA said at the time.

The three people are currently being detained at Carlow Garda Station under Section 4 of the Criminal Justice Act.

According to the ISPCA, a majority of the dogs had heavily matted coats, and were suffering from teeth, skin and eye problems. A number had sustained injuries, and their paws were badly infected from being soaked in urine.

There was a large range of breeds seized including huskies, cocker spaniels, Yorkshire Terriers and Shih Tzus.