Tánaiste defends herself against criticism over handling of whistleblowers 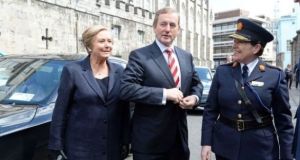 From L-R: Tanaiste Frances Fitzgerald, Taoiseach Enda Kenny, Garda Commissioner Nóirín O’Sullivan. ‘The scope of the inquiry needs to be widened to include all whistleblowers who have brought matters of ill-treatment to the attention of the Minister,’ solicitor Trevor has said. File photograph: Eric Luke/The Irish Times.

Tánaiste and Minister for Justice Frances Fitzgerald has defended herself against criticisms that she or her Department have not responded seriously or urgently enough to the complaints of whistleblowers.

The solicitor for garda whistleblower Keith Harrison said earlier on Monday that the scope of the inquiry into the treatment of whistleblowers needs to be widened.

Trevor Collins alleges his client, Garda Harrison, had been subjected to intimidation, harassment and ostracisation while senior garda management orchestrated a deliberate smear campaign against him.

“The scope of the inquiry needs to be widened to include all whistleblowers who have brought matters of ill-treatment to the attention of the Minister,” he said on RTÉ’s Morning Ireland.

Mr Justice O’Neill was appointed to examine two new protected disclosures made to the Minister Fitzgerald in the last 10 days. Both allege a smear campaign against Sgt Maurice McCabe.

Mr Collins said Garda Harrison had been astounded to learn on Friday evening the terms of reference of the inquiry.

“All week the allegations that were before the Dáil, on the Dáil record, reveal that there appears to be a deliberate high level smear campaign against whistleblowers within an Garda Síochána.

“We took it that the Tánaiste would take steps to inquire into these very serious issues of public concern.

“It is disappointing to learn that she has chosen to essentially cherry-pick and base any inquiry solely on the disclosures of Sgt McCabe and Supt Taylor, rather than the other whistleblowers who have suffered similar treatment at the hands of the Garda Síochána.”

Ms Fitzgerald said later on Monday she could not comment on particular cases which had come to her from garda recipients under the protected disclosure system, but said Mr Justice O’Neill would review all disclosures made to her.

“I have asked the judge to review the protected disclosures that came to me which I regard as very serious.

‘All concerns being taken seriously’

“It’s important that the judge is given six weeks to review those in the very particular circumstances and details that they were given to me.”

The Tánaiste said she has regarded the whole issue as one a serious nature and had taken the appropriate steps.

She said she referred the issue to the Policing Authority last June and would have an initial report from it “within six weeks on the policy side.”

“One of the reasons I have asked the Police Authority to examine whistle blowing generally is because of the concerns that are out there.

“All of the concerns are being taken seriously by me and the department,” she said.

“I want to ensure that changes and that have come into operation within the last two years, the new policy, the particular procedures that have been put in place, the information is being given out to (gardaí), what the Garda Commissioner has said that she wants the Garda Síochána to be a safe place for whistle-blowers, I want to make sure that is actually happening. That is my concern.”

Mr Collins, said the inquiry appears to be “flawed from the very outset” given that “Mr Justice O’Neill would not be dealing with all whistleblowers”, who as such, would not have their rights vindicated.

While serving in Athlone in 2009, Garda Harrison prosecuted a colleague (unsuccessfully) for alleged drink driving, despite opposition from senior officers.

Afterwards, he claims, he was subjected to bullying and harassment by colleagues and, despite an unblemished record, to unprecedented scrutiny. This resulted in him facing 16 claims of breaches of discipline, four of which were upheld.

In December 2015, a High Court judge ordered the Garda to abandon an investigation into him for allegedly intimidating his partner, a claim Garda Harrison denied. Earlier in his career, he received a Scott Medal for bravery.

Mr Collins said that two and a half years ago his client made protective disclosures to, at that time, a confidential recipient, which was later referred to GSOC.

“Following on from that he has endured a campaign orchestrated by, we believe, by senior members of an Garda Síochána, the sole purpose of which was to undermine his credibility and effectively destroy his reputation.

“This campaign has been endured by my client. We have made known to the Minister that this has been ongoing and we’ve called on her to take immediate action,” he said.

Mr Collins said he sent a letter to the Tánaiste on October 8th, seeking a wider review, but had not yet received a response.

“I have outlined to her in no uncertain terms the issues that I believe are of public concern.

“They have been on her desk since May at the very least, this is the fourth or fifth time I have written to the Minister on this matter.

“To simply ignore these issues and leave my client in limbo does not vindicate his rights.”

He said that recently, they had learned of an instance where certain issues were disseminated to the media from garda headquarters.

“This is one of the facts that has been confirmed to our client. It confirmed to him that what we believe is true.”

Mr Collins said there were similarities between the whistleblowers from different divisions and their reported treatment - all suffering the same type of treatment.

5 Cousins jailed over hijacking of minibus outside Dublin Airport