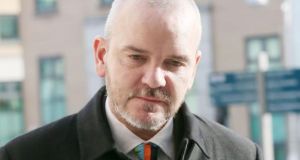 Former solicitor Thomas Byrne has said he engaged in several “unorthodox” deals with clients to transfer their houses into his name but denies engaging in fraud.

Former solicitor Thomas Byrne has said he engaged in several “unorthodox” deals with clients to transfer their houses into his name but denies engaging in fraud.

On his second day of cross-examination during his €52 million theft and fraud trial, Mr Byrne denied he forged the signature of Aideen Costigan to transfer her family home into his name without her knowledge.

He told prosecuting counsel Remy Farrell SC that Ms Costigan agreed to sell the house for €410,000 with the understanding that she would not receive the money for several months.

Mr Byrne said he intended to pay Ms Costigan when he “came into funds” but that the Law Society moved in and shut down his practice before this could happen.

Mr Byrne said he acted for Ms Costigan in the deal but that she did not know that it was him who was buying the house. He said it was his practice not to tell clients that he was the purchaser when buying their houses.

Mr Farrell asked the accused if he expected the jury to believe that Ms Costigan agreed to hand over her house on the promise of a stranger to pay her the money sometime in the future.

“Wouldn’t she be better off parting with the title deeds for a bag of magic beans?” counsel asked.

Mr Byrne said that Ms Costigan was happy to sign over the house to anyone because she would receive above the market value when she was paid.

Mr Byrne (47) of Walkinstown Road, Crumlin is accused of theft and fraud offences totalling €51.8 million. The charges allege he transferred clients’ homes into his name and then used them as collateral for property loans.

Regarding another house owned by the family of a childhood friend, Mr Byrne also denied defrauding them out of the property.

He said he told his friend Brendan Dunne that he was being put under pressure and threatened by his business partner John Kelly to secure a loan from Bank of Scotland and that he needed security to do this.

He said that Mr Dunne agreed to sign over the family home to him temporarily so he could use it as security with the bank. He said his intention was to transfer the house back to Mr Dunne at a later date but that the closing of his practice intervened.

When Mr Farrell asked him if he defrauded the family of the late Kathleen Fahy out of a house, Mr Byrne insisted that he had a deal, arranged through Ms Fahy’s daughter, to buy the house.

Similar to the deal with Ms Costigan, Mr Byrne said he intended to pay her the money at a later date but his practice was shut down before then.

Counsel asked Mr Byrne why all of these people would lie to the court, the gardaí­ and the Law Society by alleging the solicitor had defrauded them. He asked if his close childhood friend Mr Dunne was “throwing him under a bus”.

Mr Byrne replied that he understood why they were lying and said that he would do the same thing in their position. He said they needed to lie in order to get their houses back after the Law Society closed his practice.

He said the Society wouldn’t assist them if they said they had a deal with “disgraced solicitor Thomas Byrne.”

Mr Farrell accused Mr Byrne of being evasive and obtuse in his evidence and commented that questioning him was “like trying to pick up mercury with a fork.”

The trial continues before Judge Patrick McCartan and a jury of seven men and five women. -

1 Coronavirus: Varadkar returns to practising medicine to help during crisis
2 Donald Trump’s clown car administration has put the fear in all of us
3 Dublin criminal Lawlor may have been shot dead by man who owed him money
4 Irish doctors on getting Covid-19: ‘In 90 minutes, I deteriorated quite rapidly’
5 Robbie Lawlor profile: A feared criminal with a long list of enemies
Real news has value SUBSCRIBE