Several cars burnt out during disturbances in Tallaght 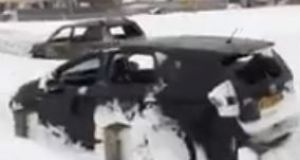 A video clip image of burnt out cars in Tallaght, west Dublin.

A number of vehicles were destroyed by fire in disturbances in the Tallaght area of west Dublin on Friday night.

Vehicles stranded in large snow drifts and others parked outside houses were destroyed in the arson attacks.

Because the emergency services were restoring order in the general area, and were also restricted by the weather in accessing the affected areas, the charred shells of the vehicles were still on the streets on Saturday morning.

It may take the rest of the day before the vehicles are cleared.

Gardaí believe the cars were set alight in an attack of vandalism by a group of people who appeared to be taking advantage of the fact that gardaí could not access some areas because of large snow drifts.

The trouble began at about 5pm when the Lidl store at Fortunestown Lane in Citywest was broken into. A large number of people gained access to the shop and looted it.

A mechanical digger was then used to ram the roof of the shop, causing significant structural damage. A safe and ATM cash machine was also taken from the shop using the digger.

The bucket of the construction vehicle was then used to try and break open both in the snow.

Gardaí who were first called to the area were forced to draw their batons and use pepper spray when they were met by a hostile large group.

They withdrew and a larger number of gardaí then arrived and had to be ferried into the area in Army vehicles capable of getting through the snow drifts.

Nine arrests were made. Two other shops were targeted, a Centra store in Jobstown and a Topaz garage in Citywest.

During the unrest, six cars were burnt out at Fortunestown Way, and there were reports of other vehicles being burnt out closeby.