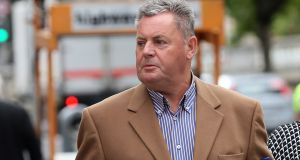 An RTÉ studio supervisor has sued over allegedly suffering constant whistling in his ears as a result of part of a toilet roll dispenser falling on his head as as he sat on the toilet at Montrose.

Christopher Bardin says he was sitting on the toilet for the disabled in the audience holding area adjoining Studio 4 when the cover of the toilet roll dispenser unexpectedly opened and hit him on the left side of the head.

He claims he has suffered tinnitus in his left ear following the accident on May 26th, 2008.

Mr Bardin, who has worked at RTÉ for 39 years, has also filed another personal injuries claim over an alleged incident in 2012 which he claims exacerbated his tinnitus condition by about 50 per cent.

He alleges failure to adequately repair and maintain the toilet roll dispenser’s latching device so as to prevent it hitting him and failure to ensure safety of the toilet facilites.

He claims he has suffered diminution of his enjoyment of life, loss of amenity and has great difficulty sleeping because of the constant whistling in his left ear which causes him to be irritable and anxious during the day.

Mr Justice Bernard Barton was told libaility had been admitted and the case was before the court for assessment of damages only.

Patricia Dillon SC, for Mr Bardin, said he was struck first on the left ear and, when he turned his head, was struck again.

The dispenser was a substantial apparatus and Mr Bardin had within a few days taken a photograph of it, she said.

Where there was a circular hole for a key, a sticking type plaster had been used and the dispenser was later replaced, she said.

Within a short time of the dispenser part hitting him, Mr Bardin heard a whistle like sound in his ear and has suffered from tinnitus since, counsel said. He attended the Eye and Ear Hospital but nothing adverse was found and a hearing test and audiogram showed up as normal.