Protest in Rathfarnham after ‘racist’ attack on Afghan family 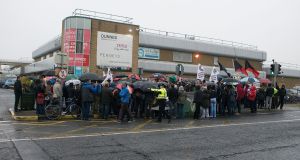 A protest was held in Rathfarnham in Dublin on Tuesday night in response to an apparent racist attack on an Afghan family in the area last week. Photograph: Dave Meehan/The Irish Times.

About 200 people held a demonstration in Rathfarnham, Dublin, on Tuesday evening in solidarity with an Afghan family who were victims last week of an apparent racist attack.

Brothers Naqeeb Ahmadzai (18) and Fazalrahman Ahmadzai (20) and their nephew Abdul (13) were punched, kicked and beaten unconscious by a gang of men as they cycled home from Marlay Park in Rathfarnham last Thursday.

The three joined protesters who gathered at Nutgrove Shopping Centre and shook hands with many of them.

Abdul said he and his uncles had not planned to attend the rally as they feared their attackers would find them but changed their minds as the crowd gathered in the heavy rain.

“I saw all the people come together. It has made me so happy that all these people are here to support me and my family,” he said.

“I love Ireland, the people have always been very kind to me. I want to stay here. My dream is to play cricket for Ireland one day.”

Abdul’s 32-year-old father, who asked for his full name not to be used, said the family had received a lot of support since the incident.

He said his son could not sleep and had not returned to school as he was worried the attackers would find him.

“They had said to them, ‘This is a warning, next time we’ll kill you.’”

Memet Uludag, a member of United Against Racism and one of the organisers of the rally, said the local community wanted to show support to the Ahmadzai family.

“In general, I think most Irish people are not racist but there is serious institutional racism.

“An attack like this is setting the groundwork for another attack if the people involved in this think they can get away with it. We want to stop it before it begins.”

Mr Uludag, an Irish-Turkish citizen who has lived in Ireland for more than 18 years, said he feared there was rising racism across Europe as the refugee crisis worsened.

“We need to be clear that actions, like what happened the Ahmadzai family, are not acceptable.”

Many of the people at the rally said it was their first time at a demonstration but they wanted to let the family know they supported them.

Anthony Hackett, a neighbour to the Ahmadzai family, said he was shocked when he read about the attack in the Irish Times.

“I was disgusted to see this had happened to them. I’d see the lads around on their bikes and playing cricket. They’ve never harmed anyone and are very quiet,” he said.

“We are devastated something like this has happened in our community. I’ve lived her my whole life.

“One attack like this is enough. I’m here today to say this should never happened again.”

Another neighbour Eileen said many people living nearby had visited the family and offered to help.

“I felt ashamed and outraged when I heard what happened to them,” she said.

“Abdul spends his time playing cricket because he wants to play for Ireland, he loves it here. The family never interfere with anyone. I’m so sad this has happened to them.”

Gardaí on Tuesday searched a number of properties in the Nutgrove area of south Dublin in connection with the assault.

No arrests were made but officers seized items including hatchets and iron bars.

A Garda spokeswoman said it was seeking four men who fled in a blue Peugeot in the direction of Dundrum.