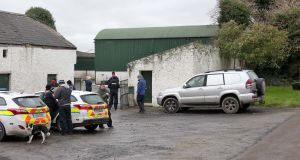 Gardaí search in farmhouses and at a lake in the area around where the dismembered body of Kenneth O’Brien was found last weekend. Photograph: Colin Keegan/Collins

Gardaí investigating the murder of Kenneth O’Brien whose torso was discovered in a suitcase in the Grand Canal are studying his personal relationships for any conflicts that may hold the key to the motive for his killing.

A review of messages to and from his mobile phone is under way and gardaí are satisfied with progress in the inquiry.

Of particular interest is any information that sheds light on the victim’s movements in his last hours or anything that indicates whether he had arranged to meet somebody during his final hours.

The dead man, who lived with his partner and young son at the family home in Clondalkin, west Dublin, had been working in Australia for several years.

The search for his missing body parts was on Thursday extended to include lands, farms and outhouses close to the stretch of canal where the torso was found near Celbridge, Co Kildare. It was hoped the extended searches might lead gardaí to the murder scene.

A number of locations near the canal have been sealed off and it was anticipated that strand of the murder inquiry would continue into next week.

An additional 50 lines of inquiry had been opened on Thursday, bringing the total number being pursued to almost 250.

The deceased had only returned to Ireland last month and Garda sources said because he had lived abroad while his partner and child remained in Dublin, he would have had a group of friends and associates his family did not know.

Detectives are trying to find any mobile phones, computers or other devices the dead man had access to over the years in Ireland and Australia.

They have contacted authorities in Australia in an attempt to establish if Mr O’Brien or anyone close to him had received threatening or anonymous messages. If a conflict that emerged in his personal life was the reason for his murder, gardaí are hopeful a study of his records would reflect that.

The investigating team has also spoken to the dead man’s family and friends to establish if they knew of any reason why somebody would want to harm him or whether he felt under pressure in any way.

Mr O’Brien had no known ties to crime and his murder and dismemberment has been described as “particularly gruesome”.

He had told family members he was “going down the country” for a short period to work before he disappeared. He worked as a mechanic, JCB driver and diesel fitter. When subsequent efforts to contact him by phone failed, a member of his extended family reported him missing.