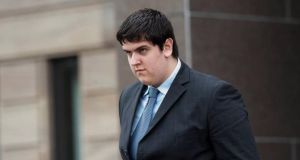 Alexander Pacteau: the sentencing judge will specify how many years of the life sentence he must serve before he will be able to apply for parole. Photograph: Mike Gibbons

The parents of murdered Cork student Karen Buckley have travelled to Glasgow to attend today’s sentencing of the man who pleaded guilty to their daughter’s murder earlier this year.

John and Marian Buckley flew from Cork to Glasgow yesterday to attend the sentencingof Glaswegian Alexander Pacteau (21) for the murder of their daughter on April 12th last.

The couple were met at Glasgow Airport at about 2am by Police Scotland liaison officer Elaine Carey, who is expected to accompany them to today’s hearing at the high court in Glasgow.

Pacteau will receive the mandatory life term for the murder of the 24-year-old nurse and occupational therapy student whom he met after she left a Glasgow nightclub.

According to Scottish sources, life sentences for murder can vary between a minimum of 15 years and a maximum of 30 years before a convicted person is entitled to apply for parole.

Last month when Pacteau pleaded guilty to the murder of Ms Buckley, a narrative of what police believed happened to the young woman was given by Lord Advocate Frank Mulholland QC. He told the court police believed Pacteau met Ms Buckley by chance as she was leaving the Sanctuary nightclub on Dumbarton Road at 1am and offered her a lift home.

He said police believed Pacteau murdered her within 20 minutes, strangling her and hitting her on the head with a spanner in his car while parked on Kelvin Way.

Pacteau tried to dispose of Ms Buckley’s body by first soaking her remains in a bath of caustic soda and later in a barrel of the solution on a farm.

After hearing an outline of the case from Mr Mulholland and submissions from defence counsel John Scullion QC, Lady Rae said she would remand Pacteau in custody for sentencing today. She said she wanted some background reports on Pacteau and it would give her an opportunity to read victim impact statements submitted by Ms Buckley’s family.