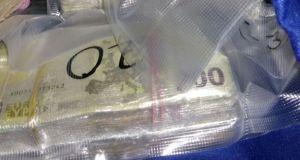 The cash which was seized by gardaí in Ballymun, Dublin, on Saturday night.

A man has been arrested following the seizure of cash in excess of €100,000 during a stop-and-search operation in Dublin.

The operation involved officers attached to the Drugs and Organised Crime Bureau and the Special Crime Task Force.

The money was discovered concealed in a truck after it was stopped by gardaí at the M50 roundabout in Ballymun shortly before midnight on Saturday night.

He was detained at Ballymun Garda station under Section 4 of the Criminal Justice Act, 1984, but has since been released without charge.

A file is being prepared for the Director of Public Prosecutions.

Covid-19 vaccine registration system to open for 65-69 year olds tomorrow 10:32
Covid-19 Vaccine Tracker: What's available in the Republic of Ireland and what else is coming? 10:32
Mandatory vaccination of healthcare workers would be ‘most intrusive step’ - regulator 10:28
Cork Airport to close for 10 weeks to allow major runway reconstruction 10:10
Q&A: Can different Covid-19 vaccines be mixed? 09:47