More than 9.5m cigarettes seized by Revenue in past week 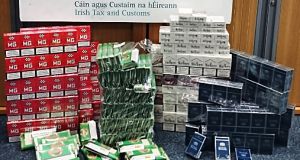 An array of illegal branded cigarettes and tobacco seized in the State in the past week. Photograph: Revenue 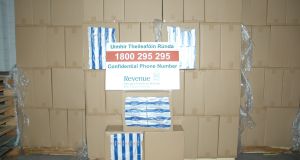 Boxes of some of the cigarettes seized by Revenue officers over the last week. Photograph: Revenue

A total of more than 9.5 million cigarettes have been seized as part of intelligence-led operations in the State in the last week.

Revenue officers made the seizures in Counties Dublin, Meath and Tipperary.

On Thursday morning, some 7,800 cigarettes branded MG, Marlboro Gold and Royal Classic, along with 3.5kg of Flandria tobacco, were seized when three houses in Dublin’s inner city were searched under warrant in an ongoing operation targeting illegal trade in Moore Street.

On Wednesday afternoon, officers executed a search warrant on a house in Cashel, Co Tipperary, and seized over 39,000 MG cigarettes. A man in his 40s was questioned and a file is being prepared for the DPP.

On Wednesday evening, 6.6 million cigarettes were seized at a warehouse in Co Meath.

A container of Royale Pacific cigarettes had originated in Vietnam and arrived at Dublin Port on Monday from Rotterdam. The smuggled cigarettes were described as “Shower room linen baskets” on the manifest.

Investigations are ongoing in all of the cases.

The Revenue claims the combined value of the seized products is €5 million, representing what would have been a total loss to the exchequer of almost €4 million.

If members of the public have information on the smuggling or sale of illegal cigarettes or tobacco, they are asked to contact Revenue confidentially on free phone 1800 295 295.