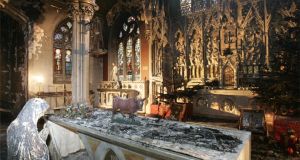 A man who caused over €4 million worth of fire damage to a landmark Dublin church, has been committed to the Central Mental Hospital.

Homeless man Patrick Currie (49) was found not guilty by reason of insanity last month after a trial at Dublin Circuit Criminal Court.

His trial heard that he immediately admitted setting fire to straw behind a crib at the church with his own lighter and said he had done it because he was “God Almighty”.

“I am after burning that church out of it and now I am off to Rome to burn out the paedophiles” he told witnesses in a nearby hairdressers. He also signed his fingerprint consent forms at the Garda station as “Jesus Christ.”

Mr Currie had pleaded not guilty by reason of insanity to damaging by fire the interior and contents of St Catherine’s Church, Meath Street on January 2nd, 2012.

Following the acquittal Judge Desmond Hogan ordered a psychiatric evaluation of Mr Currie to assess his need for long-term care, as required by The Criminal Law Insanity Act 2006.

Dr Sally Linehan told the court that she has assessed Mr Currie as having schizoaffective disorder which she described as a chronic mental illness involving hallucinations and mood disorders.

Dr Linehan said Mr Currie is responding well to treatment and his mental state is relatively stable with small fluctuations. She said he satisfies the criteria under the Act to require ongoing inpatient treatment and that there is a bed available for him in the Central Mental Hospital.

The trial heard that the parish priest at St Catherine’s Church, Fr Niall Coghlan, had spotted Mr Currie without any shoes in the church that morning and had brought him a pair of shoes and boots.

Fr Coghlan said people often stayed in the church during the day because the heating was on. He was alerted shortly after that the church was on fire and the fire brigade were called.

Passers-by described hearing a man shouting that he was going to burn down the church.

The fire brigade spent two hours at the scene but had largely put out the fire within half an hour. A fireman at the scene said it was a large fire and there had been extensive smoke.

Gda Brian Hawkins said he was approached at the scene by members of the public who pointed out Mr Currie and said he was claiming responsibility. He said that Mr Currie was irate and shouting that he had burned down the church.

Mr Currie said he had started the fire in the hay behind the crib using his lighter and had not used any accelerant. He was arrested and in the patrol car en-route to Kevin Street Garda station said: “I made sure there was no one in the church before I started the fire, I did not want to hurt anybody.”

Gda Hawkins said that during garda interviews Mr Currie told gardai “I made sure no one was there because I did not want to hurt anyone. Even if there was a paedophile priest I would have told him to get out.”

Gardai asked him if he had done it to send a message and he replied: “No, I did it because no one would listen to me, I have no welfare and no medical card.”

He said it had been “symbolic.”

Gardai asked him if he was sorry.

“No,” he replied, “I will burn down the poxy Vatican when I get out in 30 years. The reason I did it was because I am God Almighty.”

Karen O’Connor BL, prosecuting, had told the jury during the trial that the fact Mr Currie had carried out the act was not in dispute and that the State accepted defence evidence given by consultant psychiatrist Dr Conor O’Neill that that at the time Mr Currie was suffering from a mental illness such that he was unable to refrain from carrying out the act.

She said that the special verdict of not guilty by reason of insanity was available to the jury if it was found that the accused person was suffering from a mental disorder at the time of the offence that was such that they did know the nature or quality of the offence, did not know it was wrong or were unable to refrain from committing the offence.