The man tried to approach the raiders after he noticed them acting suspiciously near his truck in Burnfoot, Co Donegal 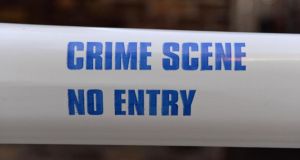 The man was rushed to hospital where he is being treated for two broken legs and other injuries. Photograph: Frank Miller

A man suffered two broken legs after suspected thieves swerved their car into the path of another vehicle while he hung on to the side. The man tried to approach the raiders after he noticed them acting suspiciously near his truck in Co Donegal.

The man was attending a wake near Burnfoot at about 7.30pm on Monday night when he noticed the men.

He approached them but they tried to move off in a silver-coloured car on to which he held. The raiders then sped off with the man clinging on to the door of the vehicle.

Seconds later, the driver deliberately swerved into the path of a car coming in the opposite direction and it hit the man.

The raiders then sped in the direction of Derry. The man was rushed to hospital where he is being treated for two broken legs and other injuries. It is understood the raiders took a laptop from the man’s truck.