Man arrested as part of murder investigation in Sligo

Natalie McGuinness (23) was from Easkey, Co Sligo but who was working in Sligo town 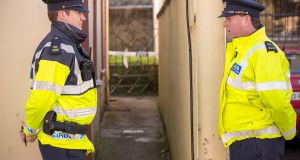 Gardaí at a house on Mailcoach Road, Sligo, where an incident occurred resulting in the death of a woman. Photograph: James Connolly

Gardai are investigating the mirder of a woman at a house on Mailcoach Road in Sligo. Photograph: Google Street View

Gardaí are continuing to question a man about the death of a woman in Sligo town.

It is understood that officers investigating the killing believe the woman was strangled.

She was named locally as 23-year-old Natalie McGuinness who was from Easkey, Co Sligo but who was working in Sligo town.

The alarm was raised shortly after 10am when gardaí were called to an apartment on Mail Coach Road in Sligo.

They found Ms McGuinness and a man (33) who was described as being in a deeply distressed condition.

Members of the Garda Regional Support Unit tasered the man who was in possession of a knife. It is understood that he had suffered stab wounds.

Both the man and the woman were removed to Sligo Regional Hospital where Ms McGuinness was pronounced dead a short time later.

Garda sources said that nobody else was being sought in connection with the incident.

Onlookers described how paramedics tried desperately to assist the woman as she was removed from the scene on a stretcher. “I saw them working on the poor thing ,” said one elderly lady who lived across the street.

Ms McGuinness was from a large extended family. One local man described her parents as “hard-working decent people – the salt of the earth”.

It is understood that the victim worked in a supermarket.

Garda said the cause of death could not be confirmed until the results of a post mortem are known, but it understood that senior officers believe the young woman was strangled.

The man, who was treated for his injuries at Sligo hospital during the day, was detained at Sligo garda station tonight under section 4 of the Criminal Justice Act 1984.

He is a native of Boyle, Co Roscommon.

Locals pointed out that the murder took place a short distance from Old Market Street where 67-year-old Eugene Gillespie was murdered in his home in September 2012.

“People in the neighbourhood are just shocked,” said local councillor Declan Bree . “I want to extend heartfelt sympathy to the family and I just hope the perpetrator is brought to justice as soon as possible”.

Local residents said they were unaware of the incident until they saw gardaí and an ambulance arriving outside the two-storey apartment building on Mail Coach Road where the woman was fatally injured.

One neighbour said: “I woke up at about 10.30am and saw the gardaí outside the building. It’s a very quiet house. To be honest I did not know the couple and don’t know who lives there.”