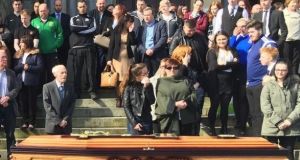 The funeral of Michael McGibbon being held at the Holy Cross Church in Belfast last April. File photograph: PA

A man and woman have been arrested by detectives investigating the murder of Michael McGibbon in north Belfast.

The 33-year-old father-of-four died after being shot several times in the leg in Butler Place in Ardoyne on April 15th last.

The suspects, both aged 35, were arrested in north Belfast on Wednesday morning and have been taken to Musgrave police station for questioning.

Taxi driver and former chef Mr McGibbon was shot in an alleyway 24 hours after two men went to his house to threaten him.

Dissident republicans have been blamed.

Teenage girl (18) jailed for a year for her role in petrol bomb attack 11:05
Covid-19 vaccine registration system to open for 65-69 year olds tomorrow 10:32
Covid-19 Vaccine Tracker: What's available in the Republic of Ireland and what else is coming? 10:32
Mandatory vaccination of healthcare workers would be ‘most intrusive step’ - regulator 10:28
Cork Airport to close for 10 weeks to allow major runway reconstruction 10:10