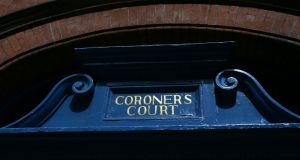 A pensioner choked on his dinner in a nursing home dining room, an inquest in Dublin has heard. File photograph: Cyril Byrne/The Irish Times

A pensioner choked on his dinner in a nursing home dining room, an inquest in Dublin has heard.

He was suffering from dementia, with short-term memory problems following a brain tumour, his son John Cunningham told the inquest.

Mr Cunningham was admitted to Beaumont Hospital in April 2014 after he went missing. He was later found in Galway.

He had previously gone missing for two days while on holiday in Madrid.

The family were finding it increasingly difficult to care for him, Dublin Coroner’s Court heard.

Mr Cunningham said on one occasion he observed his father with “too much food in his mouth”, but he said his father was “able to eat”.

“He needed 24-hour care but there were moments when he was very lucid.”

His father was discharged from Beaumont to St Gabriel’s Nursing Home in August 2014.

His care plan noted he was at risk of falling as his mobility was poor, but did not include a note on difficulty with swallowing.

Care assistant Iwona Grondzewksa brought Mr Cunningham to the dining room in his wheelchair at about 5pm on December 16th, 2014.

Mr Cunningham was placed at a table for four on his own as other residents were being helped to the dining room.

Sr Marian Connor said she then heard an unusual cough, which she said did not sound right, and she ran to Mr Cunningham.

Concerned by his colour, she shouted for help.

“I asked for a glove in order to clear his airway and to call a nurse,” Sr Connor said.

Helen Jones, who was clinical nurse manager at the time, performed the Heimlich manoeuvre numerous times on Mr Cunningham but he remained unresponsive.

An ambulance was called at 5.25pm and arrived five minutes later.

Mr Cunningham was taken to Beaumont Hospital, where he was later pronounced dead.

A postmortem found the cause of death was cardio-respiratory arrest due to an episode of choking on a food bolus.

The coroner affirmed the recommendations of an internal review conducted at the nursing home, which included new dining room protocols regarding meal-time supervision and a new emergency alert system.