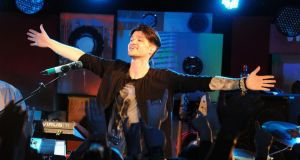 A spokesman said overall the emergency department was slightly busier than usual with 176 attendances “but within that figure the ED had an exceptional amount of alcohol-related presentations”.

Ambulance services in Dublin reported a 50 per cent increase in emergency calls over an average Thursday after Arthur’s Day celebrations last night.

Greg O’Dwyer of the East Regional Communications Centre, which co-ordinates the ambulance service in Dublin, reported a 50 per cent increase in emergency calls but said there was no breakdown of what kind of calls they were and they were not at all alarmed about it.

“Last night would equate to slightly busier than an average Saturday night in the city but certainly a lot less than an all Ireland final night or New Year’s Eve,” he said on RTÉ radio’s Morning Ireland show.

“The average calls for a Thursday night are normally around 80 to 100 and last night was 158 but we have no way of telling what kind of calls they are until the ambulance report forms come back. But it wasn’t busier than an average Saturday night or only slightly busier and certainly not as busy as the other celebratory nights such as All-Ireland final day or New Year’s eve or Halloween.”

St Vincent’s University Hospital said emergency department presentations were “within the normal range” and there were no alcohol-related incidents.

“St Vincent’s University Hospital would normally see 100 to 150 new ED attendances per day, with 20 to 40 between midnight and 8am.”

Emergency department consultant at Cork University hospital Gerry McCarthy said 14 attendances related to Arthur’s Day were recorded out of about 180, which he did not regard as excessive. One person was admitted.

“The Mercy University hospital in the city, which got severely hit last year, they reported two attendances as related to Arthur’s Day,” he told RTÉ.

Figures for St James’s hospital were not immediately available.

Arthur’s Day is promoted by Guinness manufacturer Diageo. The company has been the subject of much recent criticism over the promotion of alcohol.

Dr McCarthy said the company had been subjected to “ a bit of a crusade” this week.

“That’s not a comment one way or the other about alcohol. Certainly we seem to have concentrated on Arthur’s Day more so than we need to. On other celebration days, we tend to be very busy also and I think that’s our general experience in relation to Arthur’s Day,” he said.

“What is clear to us is that if you increase the unit price of alcohol the amount of binge drinking reduces. And it is probably the binge drinking that affects us most immediately in the emergency department where this behaviour leads to accidents and assaults.”

Peter O’Brien of Diageo said the biggest success of the night “was that hundreds of thousands of people visited pubs all over the country and had amazing experiences”.

He said the company made a contribution to policing efforts in Dublin and Cork.

Mr O’Brien said while it had been a difficult week for the company, the controversy over Arthur’s Day had been an important contribution to the debate about alcohol abuse in Ireland.

“We’ve put the pub at the centre of what needs to happen. That’s where people need to go to drink. I think that’s great because the pub is in crisis and we need to do something about that.

“What has happened this week has elevated a much wider debate that is going on, which is - how do we deal with some of the misuse issues in Ireland and if we’ve helped contribute to that, that’s a good week’s work.”