Legal challenge to Brexit to be heard at Belfast High court 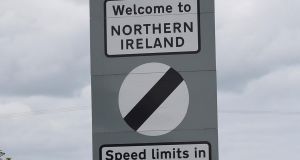 A file image seen on the Border of Co Armagh and Co Louth. Photograph: Reuters

A landmark legal bid to stop the UK’s planned departure from the European Union will be heard at the High Court in Belfast next month, a judge confirmed on Friday.

Mr Justice Maguire said he was setting aside two days for the legal challenges to Brexit. He is to focus on all issues and implications specific to Northern Ireland - including claims that leaving the EU will inflict damage on the peace process.

The judge said: “We have to be clear on the plan of achieving completion of this litigation in a relatively short period of time.”

Separate proceedings have been issued by the father of a loyalist paramilitary murder victim and a cross-party group of MLAs.

They claim it would be unlawful to trigger Article 50 of the Lisbon Treaty - the formal process for confirming the UK’s exit - without first securing Parliamentary authorisation.

Both cases being mounted in Belfast centre on the Government’s response to the June 23 referendum result. Even though the UK overall voted narrowly to leave, a 56 per cent majority in Northern Ireland wanted to remain.

The campaigner, whose son Raymond McCord Jr was murdered by the UVF in north Belfast in 1997, is taking the case amid concerns that European peace money which goes towards victims of the Troubles may be discontinued.

The MLAs, backed by representatives of the voluntary and community sector in Northern Ireland, are also contesting the legality of the process.

They have identified a series of obligations that must be satisfied before Article 50 can be triggered, including requirements for parliamentary legislation and the consent of the Northern Ireland Assembly.

In court on Friday Mr Justice Maguire announced his plan to stay grounds of challenge in common with the proceedings in London until judgment is delivered in those cases.

He asked lawyers in the Northern Ireland actions to try to agree on all remaining issues which he will then have to determine.

“The court is going to list the case with a timetable of two days; the court has pencilled in October 4th and 5th as the dates for hearing,” he added.