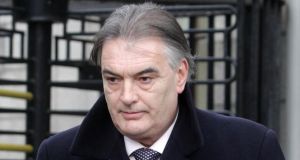 Ian Bailey, who has always denied any involvement in the death of Sophie Toscan du Plantier


A lawyer for the family of murdered French woman Sophie Toscan du Plantier has backed a call from Ian Bailey’s solicitor to have the DPP’s role in the case included in the inquiry into it as part of the investigation into Garda recording of phone calls.

Alain Spilliaert, who represents Ms Toscan du Plantier’s parents, Georges and Marguerite Bouniol, said he agreed with Mr Bailey’s solicitor, Frank Buttimer, that the Government-appointed commission of inquiry should also look at the role of the DPP.

Mr Bailey was twice arrested for questioning about the murder of Ms Toscan du Plantier in Schull in west Cork in December 1996. He was never charged in relation to the killing and had always denied any involvement in the death. He is now suing the State for wrongful arrest.

Earlier this week, Mr Buttimer claimed concerns about the Garda handling of witnesses Marie Farrell and Martin Graham, and an attempt by a senior Garda officer to influence the DPP into procuring a prosecution against Mr Bailey, were known about by the DPP as far back as 2001.

Mr Buttimer said the DPP’s failure to act on these matters should be examined by the commission, to be chaired by Supreme Court judge Nial Fennelly. Much would depend on how Mr Justice Fennelly interpreted the term “responsible authorities” set out in the terms of reference, he said.

Shared concerns
Mr Spilliaert yesterday backed Mr Buttimer’s call, saying both the Bouniols and the campaign group, the Association for the Truth about the Murder of Sophie Toscan du Plantier, shared his concerns about the DPP’s role in the case.

“We have many questions regarding the DPP’s role in this case which we would like to see answered, including many about the DPP’s 2001 analysis of the case where he decided not to prosecute Ian Bailey, because we believe it is a flawed analysis,” said Mr Spilliaert.

He said there were also “strange” interpretations by the DPP in his document analysing the evidence against Mr Bailey. He pointed to comments regarding Mr Bailey’s willingness to give blood samples as “objectively indicative” of innocence.

“We find this a very strange comment to make – we accept Ian Bailey gave his blood sample voluntarily but if he had refused to give a sample, then he would have immediately drawn the suspicions of the investigating gardaí upon himself,” he said. “And we are aware that gardaí pointed out to the DPP there were several Irish cases where suspects who were later convicted gave samples voluntarily such as the cases of Rachel Kiely in Cork and Marilyn Rynne in Dublin – a willingness to give a blood sample proves nothing.

“We would like to know what part these errors, interpretations and omissions played in the DPP’s decision not to prosecute Ian Bailey which, from our point of view and what we know of the case, we believe was a wrong decision.”

A spokeswoman said the DPP would not be commenting on the matter.