Karen Buckley: Some of many unanswered questions

Key questions surrounding the disappearance and death of Karen Buckley 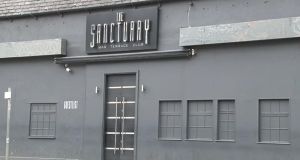 The Sanctuary nightclub in Dumbarton Road, Glasgow where student Karen Buckley was seen on CCTV footage in the early hours of Sunday morning talking to a man before she went missing.Photograph: Paul Ward/PA Wire

1 What happened that prompted Karen to leave her friends in the Sanctuary nightclub on Dumbarton Road around 1am on Sunday morning ?

2 What happened to her when she left the nightclub with a 21-year-old man? Did she go back to his flat at Dorchester Avenue as he told police when he gave investigators a witness statement ?

3 What prompted police to elevate the 21-year-old man from a witness to a suspect in the case? What information did they receive or evidence did they gather to detain him on Wednesday ?

4 Where and when was Karen Buckley killed? Police have recovered a knife from the Forth and Clyde Canal and a post-mortem has been carried out but police have not said how Karen died ?

5 If Karen was killed early on Sunday morning, what did her killer do with her body between then and Monday morning when a car was seen acting suspiciously near High Craigton Farm?

Dispute over two uninsured horses worth up to €4.5 million comes before High Court

Man claims former partner brought horses, one pre-selected for Olympic Games, to Waterford so they would be beyond his reach