Judge ‘stunned’ at request to recuse himself from Loughinisland film case 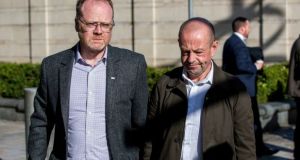 A Belfast High Court judge has described as extraordinary a suggestion that he should step aside from the early stages of a legal challenge to the validity of a search warrant over the suspected theft of confidential documents from the Police Ombudsman’s office.

Mr Justice McCloskey said he was “stunned” to receive a letter which suggested he recuse himself from the case because of his role as a barrister in separate litigation 17 years ago.

Award-winning reporters Trevor Birney and Barry McCaffrey were arrested in August over the alleged theft of confidential material from the offices of Police Ombudsman for Northern Ireland Michael Maguire.

It is alleged the material appeared in their No Stone Unturned film on the 1994 loyalist paramilitary massacre at Loughinisland, Co Down. Six men were killed when Ulster Volunteer Force gunmen opened fire in the Heights Bar where the victims had gathered to watch the Republic of Ireland play in the World Cup.

Searches were also carried out at three properties in Belfast by detectives from Durham Constabulary supported by officers from the PSNI. The legality of that search warrant is being challenged.

A barrister acting for Fine Point Films and Mr Birney told the court on Wednesday that his instruction was that a formal recusal application be made, if the judge intended to sit.

Mr Justice McCloskey told him the letter contains the “sadly misconceived” suggestion that a judge of the High Court in Northern Ireland is “not sufficiently impartial” to manage a case. He said he read the letter “several times to make sure I am not in the middle of some bad dream”.

The case is due to be heard again in the new year.

The documentary by Mr Birney and Mr McCaffrey broke new ground by publicly naming those it said were suspects in the shooting. No one has ever been convicted for the killings.

In a landmark report in 2016, Dr Maguire concluded the security forces colluded with the killers.

The PSNI, concerned about conflict of interest issues, asked Durham Constabulary to look into the alleged theft of the document after the film was released .

Durham’s Chief Constable Mike Barton and the ombudsman are at odds over whether a crime was reported to police. The ombudsman’s office has denied making a “complaint of theft” to the PSNI. - PA