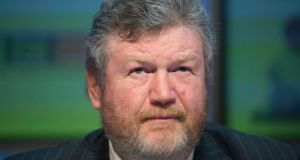 A new body, to run a service providing court-appointed guardians in child care cases, is under consideration by Minister for Children James Reilly.

The Minister will examine whether a private organisation, such as children’s charity Barnardos, should be considered to run the service.

Guardians Ad Litem, known as Gals, are appointed by judges under the Child Care Act 1991, to represent the wishes and needs of children in child care cases. They meet children, foster carers, parents and social workers and report to the courts on their findings.

They are currently appointed on an ad-hoc basis and have no oversight or regulation. An estimated 80 per cent of Gals are legally represented in court.

For more than 15 years, there have been repeated calls for regulation of the service. Gordon Jeyes, the head of Tusla, the Child and Family Agency, has queried the cost of running Gals, which comes out of the agency’s budget and which was more than €16 million in 2014.

A consultation paper, circulated to interested parties late last year, attracted 24 responses. In it, the Department of Children said that new legislation would be required to regulate the service. It said that courts should only be able to appoint Gals working with a proposed new national service and that only qualified social workers, or possibly those with degrees in psychology or social care, could be appointed to the service.

They would also have to undergo Garda vetting. The use of legal representation for Gals would be on an “exceptional” basis only.

The consultation document suggested that the service could be subsumed into an existing body, such as the Courts Service, or that an entirely new State body could be set up, or that the work could be contracted out to an organisation, such as Barnardos. The charity already supplies the majority of Gals in the country.

Freda McKittrick, head of Barnardos’ Gals service, said that whatever system is chosen, it should be separate from Tusla. She also had concerns that if the responsibility was given to the Courts Service, it would become a service for the courts rather than for children.

“Barnardos have effectively been doing more than half the work in the State for 15 years or more, so we would be very capable of doing it,” she said.

Whatever the decision made, the service provider would have to satisfy the Department of Children about appropriate governance, appropriate standards, value for money and appropriate administration, Ms McKittrick said.

The charity is hopeful that, regardless of the make-up of the next government, the planned reform will go ahead.

“These are the most vulnerable children in the State; social workers are asked to release children in their care to people they hope are Garda-vetted and trained professionals, but there is no guarantee of that,” Ms McKittrick said.