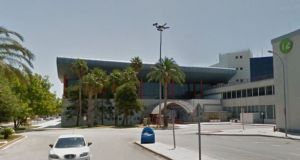 The 34-year-old was held at Alicante airport on foot of a European Arrest Warrant.

Police in Spain have arrested an Irish man wanted over a kidnapping in Dublinsix years ago.

The 34-year-old was held at Alicante airport on foot of a European Arrest Warrant.

The man, from Lucan in Co Dublin, fled in 2012 while on bail for his alleged involvement in a robbery in January 2010.

He was accused of stealing more than €100,000 from a Brinks Allied employee and also falsely imprisoning him, his mother and a child at the house in Dublin’s Bath Avenue.

A Spanish National Police spokesman confirmed the arrest on Sunday.

“The National Police have arrested at Alicante Airport an Irish fugitive accused of committing 11 crimes in his country,” he said. “He was living in the province of Alicante with fake ID and adopted high levels of security to avoid being discovered.”

Reports last year said gardaí had been tipped off the man was based in Spain but could be using a fake passport to travel between the Costa Blanca and Ireland. It was also reported he had been travelling to Australia.

n Monday, January 4th, a security guard and two members of his family were taken hostage, leading to the theft of more than €100,000.

The Brinks Allied employee was targeted by a gang of four masked and armed men who entered his home off Bath Avenue in Irishtown, Dublin, at 6.30am.

They took his mother, who is in her 70s, and niece hostage and forced him to drive to the Bank of Ireland on O’Connell Street where his company was delivering cash yesterday morning. They also gave him a mobile phone.

The robbery appeared to be well planned as the gang knew a cash delivery was due, and they also knew where the kidnapped man and his family lived.

The employee obtained a quantity of cash from the bank and was directed to go to a hotel car park in Drumcondra in a white Renault van, where he left the vehicle.

He then took a Dart to Bray where he alerted gardaí to the disappearance of the money.

His mother and niece were held captive for about six hours before they were released in the Newvale Crescent estate in Shankill, south Dublin.

The man will now be taken to Madrid for an extradition hearing held between closed doors where he will be asked if he consents to being returned to Ireland or not.

If he agrees to extradition, he will be flown back to Dublin within the next fortnight. The process will be slowed if he refuses to be sent back and a second hearing will then place. He is expected to be held in jail until his future is decided.