Government taskforce to look at treatment of fishing fleet workers 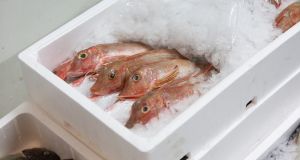 The Government is setting up an interdepartmental taskforce to examine claims about the mistreatment of workers on Irish fishing fleets.

The move follows claims by The Guardian newspaper, following a year-long investigation, that illegal African and Asian migrant workers are routinely used as cheap labour on board some Irish trawlers.

Among those working to address the “complex issues arising” will be represenatives from the Departments of Justice, Jobs Enterprise & Innovation, Transport, Tourism and Sport and Agriculture, Food and Marine, as well as the Attorney General’s office, relevant agencies and An Garda Síochána.

The Department of Agriculture said in a statement that Minister for Agriculture Simon Coveney would chair the group which would meet on Thursday to formulate the approach.

Earlier Minister for Public Expenditure and Reform Brendan Howlin described people trafficking as one of most egregious crimes of our time.

“It certainly not a well-known secret to me, or I imagine to the Government,” Mr Howlin said.

“The issue of people trafficking is one of the most egregious crimes of our times. The Government is absolutely determined to tackle it with full vigour.”

He was speaking on his way into the Cabinet meeting.

“You can be absolutely certain no resource and no effort will be spared.”

On Monday, Coveney said he was very concerned about allegations, particularly in relation to the safety of workers.

Mr Coveney said an Garda Síochána had established a project “specifically to address concerns in relation to potential human trafficking in the maritime sector, including fishing”.

Ken Fleming of the International Transport Workers’ Federation (ITF) described the practice as a “national disgrace” and said a blind eye had been turned to abuses for years.

Mr Fleming claimed “90 per cent of fishing vessels are involved” in the practice and that he had been trying to raise awareness of it for almost 10 years.

“I produced a report in 2008 and 2010 and sent it to every Government minister who would read it, basically a report saying this practice was happening and it named the boat owners and nothing was done,” he told The Irish Times.

He cautioned against any rash decisions in the wake of The Guardian report, saying the Government needed to get all stakeholders – including boat owners, the Federation of Irish Fishermen and ITF – around the table to clean up the industry.

“Rounding people up and driving them to Dublin airport will not solve this because they’ll simply be replaced,” he said.

Mr Fleming said the Government had two choices: to implement a work permit system or decide not to and monitoring would be needed if a permit system was introduced to ensure people were being treated correctly.

He said if permits were not issued, measures should be taken to get crews home safely and steps taken to choke off the supply of labour.

Siptu called on Mr Coveney to introduce employment protection legislation, proper training and rigorous inspection processes for migrant workers employed in the fishing industry, saying the revelations came as no surprise to those working in the sector.