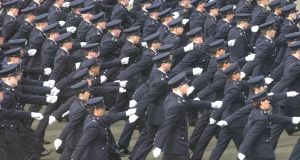 Gardaí displaying their marching skills during their graduation veremony at the Garda College,Templemore. Photograph: Brenda Fitzsimons

The first Garda recruits in five years will undergo a revamped training programme when they report to the Garda College in Templemore, Co Tipperary, as senior management in the force moves to respond to criticism of loyalty being prized over honesty among officers.

Judge Peter Smithwick, who chaired the tribunal into alleged collusion between members of the force and the Provisional IRA, last year criticised Garda culture in his report and said allegations of inappropriate or illegal conduct by members must not be ignored on the basis of “some misguided sense of loyalty”.

The ban on recruitment in the public service means the batch of 100 Garda recruits, who will take up the course on Monday week, will be the first to begin training since May 2009.

During an open day at the Garda College yesterday, Chief Supt Anne-Marie McMahon, the director of training and development, told reporters the old “didactic, rote-learning” approach is to be replaced with a programme which will encourage “individual thinking”. She said this would assist in the combating of issues such as the alleged “blue wall” code of silence within the force.

“With the old approach, we found recruits had trouble transferring information they were getting to an operational level,” she said.

“The new approach is a far more integrated, holistic approach. We hope to foster critical thinking in our officers. We want gardaí that are reflective and can analyse information and assess how they might improve at their jobs. We are dealing with issues they are going to encounter on the streets. We want gardaí who will think as individuals.

“We are getting them into the practice of really critically thinking about what they are doing and understanding the importance of considering all the aspects of the case, researching the law in relation to it; and taking notes and being able to justify that at a later stage.

“In terms of the blue wall or anything like that, I would like to think we are an open college. Our primary objective is to produce good gardaí who will go about their jobs with professionalism, honesty and integrity.

”She said the training, which takes two years and is accredited by the University of Limerick, will involve problem-solving scenarios which get incrementally more difficult as the programme progresses.

Supt Pat McCabe, a senior officer at the college, said the new training was designed to ensure gardaí make decisions they can stand over. “We’re responding all the time to the changes in society. We have to be accountable – and very clearly accountable – for what we do and how we do it.”

He added it was “inevitable” there will be differences between how younger and older gardaí do police work. “Society changes and we must evolve,” he said. “We will respond to the changing times, communications and all the rest of it.

“You have to take criticism on board and analyse it. I think that’s what we’ve done. We took some criticism. We looked at our previous programme and came up with this new approach. We need gardaí appropriate to police modern day society.”

Schools face losing hundreds of teaching posts due to dispute 19:10
Flood-hit families in Clare call on Government to relocate them 19:04
Head of key State transport body to step down 18:53
SF criticise delay as next bid to elect taoiseach unlikely until late March 18:43
Woman (38) appears in court charged with murder of Garreth Kelly 18:36

1 Coronavirus: What we know so far about how Ireland is affected
2 Woman (38) appears in court charged with murder of Garreth Kelly
3 Coronavirus: Ireland plans for massive increase in tests
4 What is coronavirus and what should I do if I have symptoms?
5 Dublin stabbing: Parking space was at centre of previous rows, gardaí told
Real news has value SUBSCRIBE