Officers have spoken to some organisers of rally in which up to 4,000 people took part

Over 5,000 people gathered on the streets of Dublin to support the “black lives matter” movement in the wake of protests in the Unites States over the death of George Floyd. Video: Karl Hayden/Dara Dara Mac Dónaill/Sorcha Pollak 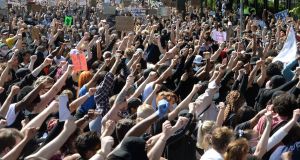 People attend a rally in solidarity with Black Lives Matter outside the US embassy in Ballsbridge, Dublin. Photograph: Dara Mac Dónaill

Gardaí are investigating Monday’s Black Lives Matter protest in Dublin with a view to potentially prosecuting organisers for their role in such a large public gathering during the Covid-19 lockdown.

The Irish Times understands a number of people who took on supervisory or organiser roles at the protest in the city centre and Dublin 4 were spoken to by gardaí on duty and had their names and contact details taken. They are now being investigated under the Covid-19 regulations, one of which prohibits the organising of large events during the lockdown period.

In reply to queries, Garda headquarters confirmed an investigation was underway and was being conducted under section 5 of the Health Act 1947 (Section 31A-Temporary Restrictions) (Covid-19) (Amendment) (No 3) Regulations 2020 which “places restrictions on the holding of an event”.

“An Garda Síochána is investigating [a] potential breach of these regulations. . . and the advices of the Director of Public Prosecutions will be sought in respect of any further actions to be taken.

“The Covid-19 pandemic remains a public health crisis and An Garda Síochána continues to appeal to all citizens to comply with public health guidelines and regulations, in particular essential journeys, in order to continue to save lives.”

Now was “not the time” to organise or attend such mass gatherings due to the risk of transmitting Covid-19, he said.

People should follow public health advice and exercise their judgement on “impromptu” mass gatherings, he said.

“We have no public health advice on protest; our advice is on gatherings,” he told a briefing on Tuesday.

A number of senior officers said they were aware of plans to hold another Black Lives Matter event next Saturday. But they explained because permits were never required to hold an event, gardaí would not have the power to stop next weekend’s protest.

Garda sources told The Irish Times that a number of people assumed leadership duties at the protest and though they were cooperative and assisted the Garda, the holding of the event was in clear breach of Covid-19 lockdown regulations and public health advice and that holding the event was an offence. The regulations state “a person shall not hold an event in a relevant geographic area unless the event is a relevant event and the number of participants in the event is limited to not more than is reasonably necessary having regard to the nature of the purposes for which the event is held”.

The same regulations also state people cannot “participate in an event in a relevant geographical area unless the event is a relevant event and the person is a relevant participant”.

Because thousands of people attended the event, Garda sources said it would be “unrealistic” to seek to prosecute all of them or even a very large number. However, the Garda was gathering information and liaising with the DPP on a number of people who took on leadership roles .

The event was advertised widely on social media. Because no groups or individuals were clearly identified before the event as having arranged it, it is unclear if the DPP could be satisfied that some of the people identified by the Garda were indeed the organisers.

Garda Headquarters has estimated that between 2,000 and 4,000 people attended the protest, though a more precise number was difficult to determine as the protest swelled along the route from Dublin’s O’Connell Street to the US embassy in Ballsbridge.

Garda sources said when gardaí on duty on Monday asked the protestors to take a specific route towards the embassy once they arrived in Dublin 4, those requested followed the instructions. “They tried to socially distance at the start but the crowd was too big and the social distancing seemed to be abandoned immediately,” said one Garda officer who observed the protest.

Others said most of those who gathered were in breach of a variety of public health regulations, including travelling more than 5km to make a non-essential journey, which can result in a prosecution punishable by fines and/or a term of imprisonment of up to six months. Travelling to a protest is not deemed an essential journey.

Gardaí pointed out that the protestors also had failed to socially distance, while contravening the prohibition on gatherings outdoors involving more than four people.

Anyone convicted of organising an event could face fines of up to €2,000 and/or a term of imprisonment of up to six months.

Asked previously about a large protest taking place during a lock-down period, the Policing Authority had said: “While we don’t typically comment on the policing of individual incidents, we continue to seek evidence of fair and consistent application of the law and Garda policy as part of our work.”