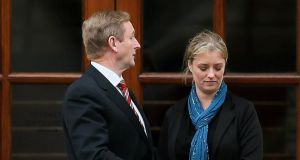 Taoiseach Enda Kenny met Mairia Cahill at Government Buildings last week to discuss allegations that she was interrogated by the IRA over her alleged rape. Photograph: Brian Lawless/PA Wire

The four people who allegedly conducted the IRA investigation into the rape of Mairia Cahill have declined the offer of a meeting with Taoiseach Enda Kenny.

The offer of a meeting arose during Dail exchanges last week when Sinn Fein leader Gerry Adams challenged the Taoiseach to meet the four people named in the BBC Spotlight programme.

Peter Madden, a Belfast solicitor who represents the four, has released a letter he sent to the Taoiseach on their behalf.

In the letter, Mr Madden said he advised his clients Padraic Wilson, Seamus Finucane, Briege Wright and Maura McCrory against any meeting in the light of what he described as Mr Kenny’s “highly prejudicial statements” and the ongoing legal processes.

“I note that you, or a spokesperson for your office, contacted the media on Wednesday October 29th with regard to a proposed meeting. Both the comments attributed to you and media reporting are again highly prejudicial and inaccurate.

“Given your approach to this matter, my clients have today confirmed that they see no point in meeting, at this stage, with you given your rush to judgement and your setting aside of the court finding and legal processes. On my advice they are declining to meet with you,” said the letter from Mr Madden.