Father and son jailed over shooting at Fermanagh wedding

Man who died was much loved father of nine and grandfather of 48, court told 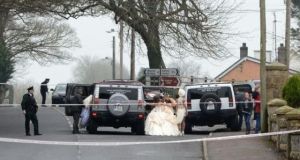 It was the Crown case that the shooting happened outside St Mary’s Catholic Church in Newtownbutler on February 11th, 2015. File photograph: Ronan McGrade/Pacemaker Press

A father and son have been jailed for a total of seven and a half years over a shooting incident at a Traveller wedding which led to a relative being killed and another wounded.

Patrick McGinley (49), Ardlougher Road, Irvinestown, Co Fermanagh, was jailed for four years after pleaded guilty to the manslaughter of Barney McGinley outside a Catholic Church in Co Fermanagh over three years ago.

Mr Justice Colton told him he would serve a further four years on supervised licence following his release from prison.

As the sentence was passed, relatives of the deceased left the public gallery, shouting: “You have to come out you know. You can stick your f***ing four years”.

As McGinley was led handcuffed from the dock to the cells, the deceased’s tearful widow Brigid repeatedly banged on the door of the public gallery, shouting at the defendant: “You’re a murderer, you’re a murder. Scum. Scum.”

His son William McGinley (29), of Sallyswood, Irvinestown, was jailed for three and a half years after he admitted wounding Barney McGinley’s son, Bernard Oliver McGinley with intent to cause him grievous bodily harm.

The judge told him that he would serve a further three years and nine months on supervised licence on his release from jail.

It was the Crown case that the shooting happened outside St Mary’s Catholic Church in Newtownbutler on February 11th, 2015 where the wedding of a niece of Patrick McGinley snr was due to take place.

Senior prosecutor Neil Connor QC said that “there appeared to a considerable amount of bad blood between the two families.

The court heard 63-year-old Barney McGinley turned up at the church with his wife in a van and parked in the carpark of the church near to his nephew Patrick McGinley snr. It was his presence at the wedding that sparked the incident, the court heard.

Mr Connor said there appeared to have been “some sort of altercation and they had a heated exchange” before the deceased drove out of the carpark and headed up the main road where he met up with other family members.

Following a discussion, Barney McGinley then returned and parked up outside the church where there was a further altercation and a home made ‘pipe gun’ or ‘stick gun’was produced.

The court heard a claim the weapon was brought to the scene by a “person in the company of the deceased”.

The court heard Patrick McGinley snr claimed he “forcibly removed the pipe gun from the deceased” and he claimed that during a struggle it was discharged.

William McGinley picked up the “crude” weapon, reloaded it with a further shotgun cartridge and fired it into the back of the deceased’s son Bernard Oliver McGinley from a range of six to ten feet.

During what was described as a “melee”, Patrick McGinley jnr and his teenage brother Bernard Patrick McGinley became involved in the incident by rushing forward from the church to assist their father.

Barney McGinley was put in a vehicle, said Mr Connor, and taken to Lisnaskea police station from where he was airlifted to the Erne hospital by helicopter. “He died in hospital some time after that.”

The prosecutor said the pathologist gave the cause of death was as a result of a “shotgun wound to the abdomen”.

At the sentencing hearing on Friday, Mr Justice Colton said it was clear that the ‘stick gun’ or ‘pipe gun’ had “not been brought” by any of the four defendants to the wedding and had in fact been brought by an associate of the deceased.

He told the court that there was “no question of pre-planning or premeditation” on the part of father of five Patrick McGinley snr.

Although his three sons had no previous convictions, Mr Justice Colton said scrap dealer Patrick McGinley snr did have previous convictions — he had received a suspended sentence at a court in Dublin in 1999 for violent disorder and also had two convictions in Belgium in 2010 and 2011 for fraud offences.

The judge said that it was clear from victim impact statements that Barney McGinley was a “much loved father of nine, grandfather of 48 and great grand father of two” who had been married to his wife Brigid for 41 years. The statements by his family said he was much missed “particularly at Christmas”.

Mr Justice Colton said that no length of prison sentence handed down by the court could “cure their anguish”.